Knowle West Running Club was set up in December 2013 by Stu Ferris. Despite a successful first month, Stu decided to embark in a personal challenge on 1 January 2014 to raise money for Mind, the mental health charity. Stu is 195 days into the 2014 x 365 challenge running 5K every day around the streets of Knowle and is known for his crazy hats, masks and running selfies!
Now firmly committed to the running challenge Stu has built on his inspiration and re-launched Knowle West Running Club on 1 August 2014 with help from Run! City Bristol. 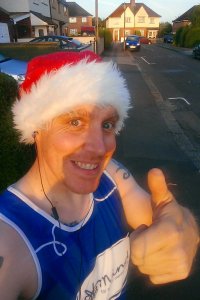 Sessions take place every Friday and Wednesday at 6pm from The Park, Daventry Road, Knowle and sessions are suitable for individuals of all running abilities including beginners. Stu hopes to share his passion for running and encourage more local people to get moving!