The packed awards room at The Institute of Sport Exercise & Health was filled with well known faces and guests. One of Great Britain’s best ever female marathon runners gave an uplifting speech on the importance of athletic discipline and sticking to your training plans no matter what your level and age. 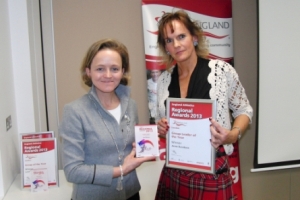 Mara Yamauchi, who runs for Harrow and is coached by her husband Shige Yamauchi, finished 6th in the 2008 Olympic Games Marathon and reminded the on looking crowd of the basic lessons in preparation when approaching a big occasion. The now retired athlete helped present the awards in the Run England categories. Chris Jones of England Athletics was also on hand to join London and National chair Tony Shiret with handing out the awards during the evening.

Congratulations to all of our winners from the London Region! 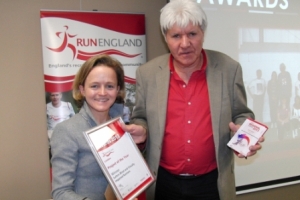 London City Runners (pictured, top left) are made up of a whopping 2,000 registered participants - not bad for a group that only started in 2010. The group even now organises a 10K run around Southwark Park.

Sutton Blind and Visually Impaired Runners (pictured, left) are the inaugural group of this kind. In partnership with NHS South West London, Pro-Active South London and Metroblind Sport Group, runners attend from across a wide area.