Thousands of runners will have the opportunity to take part in a new one mile road race on the streets of Westminster this summer.

The Bupa Westminster Mile is a series of mile-long races for all ages and abilities on Sunday 26 May 2013, in the historic heart of London.

Westminster City Council is working jointly with London Marathon Limited and Bupa to deliver the event which forms a key part of the council's long-term Olympic and Paralympic legacy.

It has received the backing of none other than London 2012 hero David Weir who, returning to The Mall where he won his fourth gold medal during last summer's Paralympics, said: "To deliver a real legacy, Paralympic sport needs high-profile inclusive events like this which can inspire more people to get involved in sport.

"The beauty of the Bupa Westminster Mile is it's a one-mile road race, making it accessible to everyone of all ages and abilities."

Across more than twenty different categories, the event is aimed at competitors of all ages and abilities across the country. This will include races for junior and senior wheelchair users as well as visually impaired athletes in the T11-13 categories.

The range of races will see first-time runners aged as young as nine racing on the same day as the elite category which is expected to attract some of the top athletes in the UK. 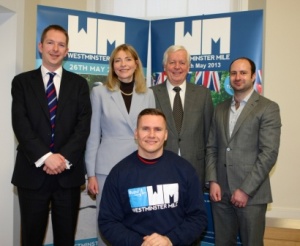 The route will take entrants along the historic Mall, site of the start and finish line of the London 2012 Olympic marathon, before heading around the edge of St James's Park in heart of Central London. The race, supported by The Royal Parks, will showcase Britain at its best in a stunning backdrop before finishing outside Buckingham Palace.

It is hoped the competition will attract more than 5,000 entrants in its first year with a view to it becoming a regular fixture in the national sporting calendar. The Bupa Westminster Mile will also act as the official UK Road Mile Age Group Championship and sponsorship contracts from adidas will be awarded to the winners of the junior and senior races.

Entry for the event is now open and people can register online by visiting www.bupawestminstermile.co.uk.

"This is a golden opportunity to create a lasting sporting legacy not just in London but across the whole country – events like the Bupa Westminster Mile will cement sport in the hearts of the nation for years to come."

"Britain has an amazing heritage in 'The Mile', with Sir Roger Bannister being the first person to run under 4 minutes and more latterly his mantle as world record holder being taken up in the 1980's by Sebastian Coe, Steve Ovett, and Steve Cram."