Good luck in the Virgin London Marathon 2013 from Run England!

We've really enjoyed meeting you all at the Expo this week, and thanks to everyone who signed our 'Wall of Fame' (pictured below right, halfway through the week).

Now that the hard part is done, it's time to fuel up with carbs, get some well-deserved rest before the big day, and think about a well-deserved treat at the end!

Live TV coverage will begin at 8.30am on Sunday on BBC One, BBC One HD, BBC Radio 5 Live and online, so don't forget to set your alarm clocks!

Check out this great Met Office infographic of historical weather conditions at the London Marathon and detailed forecast information on the Met Office events page here.

Click here for this year's elite entry lists, and here are some top last minute tips from the experts ahead of the big race! 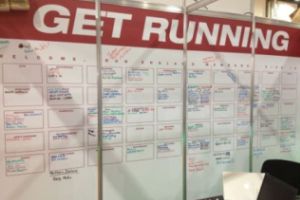 Organisers have said that preparations have gone well despite security being increased following the bomb attacks on the Boston Marathon on Monday. There will be 40% more police officers on the streets to reassure people, despite the force seeing "no link whatsoever" between what happened in the US and the London event.

The Virgin London Marathon also announced earlier in the week that it will donate £2 for every finisher in Sunday's race to The One Fund Boston set up to raise money for victims. There will also be a 30-second silence before the start and runners have been given black ribbons to wear.

The elite fields are some of the strongest ever, with the men's featuring the Kenyan trio (pictured, below left, at the 2013 Expo) of the fastest marathoner ever (on a net downhill course at Boston in 2011) Geoffrey Mutai, official World Record Holder Patrick Makau and reigning Virgin London Marathon champion Wilson Kipsang. With three of the four fastest men of all time battling it out, it should be an incredible spectacle!

In the women's field Olympic champion Tiki Gelena sent a stark message to her rivals earlier in the week when she claimed "I'm in even better shape than I was before last year's Olympics." But reigning World champion Edna Kiplagat has enjoyed an improving sequence of performances in the Virgin London Marathon, finishing third in 2011 and second in 2012, improving her personal best to a more than respectable two hours 19 minutes 50 seconds, and will hope to go one better this year. 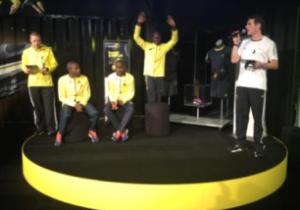 Scott Overall will be hoping to be the first Brit across the finish line, while Amy Whitehead aims to continue her huge year-on-year improvement to bid for a World Championship place on Sunday.

Meanwhile, Mo Farah called his decision to run half of Sunday's Virgin London Marathon a "no brainer", saying it gives him the perfect opportunity to learn the art of marathon running ahead of his full marathon debut next year.

This year's Virgin London Marathon will feature a new set of races for disability athletes. The IPC Athletics Marathon World Cup is part of the build up to the IPC Athletics World Championships, to be held in London in 2017.

Britain's Paralympic Champion Richard Whitehead and New Zealand's Tim Prendergast - who have become fathers for the first time in recent months with a daughter, Zara, for Richard and a son for Tim - will be spared of the joys of parenthood for a short time as they compete together in this inaugural event.

We hope that joining a Run England running group has been a useful and enjoyable way of improving fitness for many of the runners out there, and, if you're inspired by the whole occasion or are running yourself and want to keep on running and improve, you can find your nearest running group on our group finder map at runengland.org/groups.

Running groups are friendly and most are aimed at complete beginners so there will always be someone in a similar situation to you. Groups are led by qualified group leaders who will be able to guide you on your running journey.

Once again, good luck to everyone racing, running, jogging or walking the 2013 Virgin London Marathon!