A new Community Athletics Activator has been appointed to the England Athletics team in the north to help get more people active in Manchester.

Nikki Murphy started her new role on Monday 10 June. She will lead on the local development and delivery of the recreational offer from England Athletics through the Run England and AthleFIT programmes – sustaining provision and growing participation in Manchester and supporting group leaders/deliverers in their efforts.

Born and raised in West Yorkshire (and subsequently a massive Leeds United fan!), Nikki Murphy was a member of Holmfirth Harriers as a youngster and was in the athletics team while studying at the University of Central Lancashire for a degree in Sports Coaching Performance. 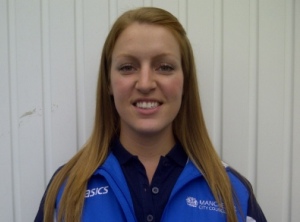 Nikki has had roles in sports development and coaching for Preston and Liverpool City Councils as well as John Moores University, and throughout her career so far she has gained coaching experience in a number of different sports from dodgeball to rounders.

Her most recent role was in sports development for the ETTA (English Table Tennis Association) in Liverpool, where she worked on the Ping! project (free play table tennis across Liverpool) in 2012.

Nikki said: “I am very excited and happy to have been given the opportunity to take on the role of Community Athletics Activator and am looking forward to being part of a successful team and will work hard to continue the excellent work that is already being done.”