Steve Grantham only started running in 2011, but has recently opened his seventh 'Beginners2Runners' running group in Kent in the space of two years.

He gave running a go, after realising life was too short to spent smoking and being overweight, but ran on his own at night, hoping no one would see him. Two years later and four stone lighter, Steve wanted to inspire more people to do the same. 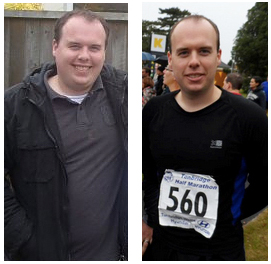 Instead of encouraging people to go out running on their own under the cover of darkness, he wanted to create a group that was fun, social and community-based so people of all abilities and all sizes could try running without feeling embarrassed. He wanted other people to feel like he did - proud to be doing something great for themselves.

With the support of the Run Kent programme, Steve and his close friend, Shaun Lee, attended a Leadership in Running Fitness course to become qualified Leaders and 'Beginners2Runners - Coxheath Running Club'  was born.

Twenty people turned up to that first session two years ago and the numbers kept growing, with the club now boasting more than 400 members. Since then, Steve has opened Beginners2Runners groups in six other locations in Kent, namely Barming, Staplehurst, Leybourne, Downswood, PaddockWood, and most recently, in Sittingbourne, which welcomed around 80 new beginner runners on its opening night!

Steve said: "I'm overwhelmed by the size of our clubs now. If you'd told me back in 2011, when I was a beginner runner myself, that we would help around 1500 people take up running in two years, I wouldn't have believed you. The support I have from all the club's Leaders is fantastic. We make the sessions fun so that people keep coming back for more. It makes me really proud to be part of something so incredible. Running really can change people's lives."

Steve is the driving force behind the club's success but he couldn't do all this without the help of his growing team of club managers and group leaders.  They are local people who know their community well and who want to help and encourage others to take up running.

Lucy Tomlinson, Run Kent Activator, said: "When I first met Steve in 2013, he was so passionate about how running had changed his life, that I knew he'd make a success of his running club in Coxheath. Little did we know that he would be replicating that success in six other locations and helping so many people take up running in the County. It shows that with the right approach, enthusiasm and encouragement, anyone and everyone can enjoy the benefits of running."

And as if life wasn't busy enough with seven running clubs on the go, Steve organised the first Beginners2Runners  race in May 2015: The B2R Woodland 5K and 10K. Just over 400 people walked, jogged or ran on the day and it was a huge success. Steve is now keen to make this an annual event and make it even bigger and better next year.

For more information on how to become a qualified group leader and set up your own running group, please visit: www.runengland.org/leader.