Over 2000 runners were set off by Zac Goldsmith MP and Richmond Mayor Meena Bond from the beautiful Kew Gardens bright and early as London 2012 Olympians fought for the title of King and Queen of Richmond.

King Chris Thompson said: “That race was a pleasure to run due to the beauty of Kew Gardens, the River Thames and Richmond Green.

“Apparently it’s been over a decade since people have been able to run through Kew Gardens so I am so pleased this 2012 legacy event has allowed me to see such beautiful surroundings. When I come back next year to defend my crown I must bring my camera!”

The first ever Queen of Richmond went to GB international cross country runner Emma Pallant who completed the Kew Gardens 10K in an impressive time of 35:44 which placed her fifth overall. 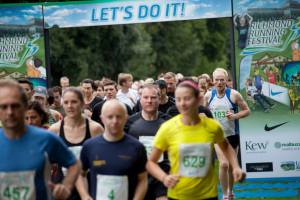 The Olympians kept on coming in the Visit Richmond Half Marathon as London 2012 marathon runner Scott Overall used the scenic race as his final preparation for the Berlin Marathon. However, a close race was won by Nathan White who saw off two local elite athletes Mike Skinner and Phill Sly. Hayley Manning won the women’s Visit Richmond Half Marathon by over three minutes to be crowned the Queen of Richmond for one whole year!

The day was not over for the volunteer staff as 700 kids from four to 15 years old, competed in the Nike Kids’ Mile and received autographs from the many local Olympians who stayed behind to support and offer advice. Every little runner athlete received a Nike tee, a medal and information on how they can get into their local running club.

All adult athletes celebrated their race with a London Pride and listened to music organised by the Crawdaddy Club Richmond. Lots of local businesses and restaurants were to be found at the festival in a day that celebrated the best of Richmond Borough.

Race Director Tom Bedford said: “Today was a huge success and everything I had hoped for. I wanted to create an event inspired by London 2012 that showed off Richmond’s beauty, businesses and talented musicians. I can honestly say this is the most beautiful running event in London and I can only thank Kew Gardens and the many staff at Richmond Council for making this happen. They share my vision of health and fitness but also community spirit.

“The highlight for me was the reception children who ran in the Nike Kids’ mile. Nike supported this event and allowed it to be free for local school children. Hopefully this event will inspire many children to join their local running club and take up running as a sport. Who knows, maybe we can help inspire the next Mo Farah!”

All runners received a leaflet following the race directing them towards their local affiliated athletics clubs and Run England groups – a great idea to help support participants in carrying on with their running! Follow Richmond Running Festival on Twitter: @RichmondRunFest.