If one of your goals for 2014 is to get fitter, healthier or even return to running after a break then you might well be setting yourself a #runningresolution in the new year.

But make sure you're not one of the majority of people who give up on their New Year's Resolutions in the first few months of the year! One way to stick to your health and fitness goals is to be around like-minded people who will motivate and support you every step of the way.

Run England groups are all led by qualified and insured group leaders and welcome people looking to take those first steps into improving their health and fitness in a supportive, beginner-friendly environment - or those who have had a break from running due to injury or any other reason - and would like to get back into it. 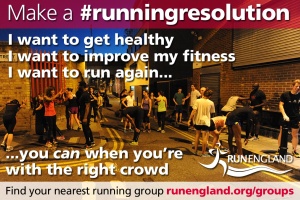 There are more than 2,000 running groups across the country, so if you're ready to make a #runningresolution and achieve your health and fitness goals in 2014, head to www.runengland.org/groups to find a registered running group near you.

If you already run, challenging a friend to join your group or start running with you will help you motivate each other to achieve your goals together. You could even challenge a few friends and set up your own running group at your work, where you study, through your local athletics club, or elsewhere in your community. To find out more about becoming a Run England group leader, visit www.runengland.org/leader.

Whether you're new to running or already run with a group, join the Run England community for free and receive £15 off Sweatshop running shoes along with other great benefits for members. Sign up to Run England at www.runengland.org/signup.