I have always been sporty, I ran at school I was alright but never the best; actually I was the only idiot who’d do the long distance ones, so I just did it.  I went to uni and ate crap and drank lots! Because I was a skint student and I got fat on the inside; didn’t realise how much until I started going gym and couldn’t even run 10 minutes on treadmill.  So I sacked off the running bit and just did weights - however I realised it wasn’t for me as I am literally the smallest person ever!

I started teaching, still went to the gym, but I then went to a running shop just because I liked the look of some Nike trainers I’d seen.  The sales guy said, "you need your gait doing" (I had no idea but I was interested).  I came out with some trainers... I didn’t even get the ones I liked! So thought I’d better use' em! My plan was to do a lap of the lake. I nearly coughed up a lung the first time I did it but I carried on for months and months until I could run a 5k without stopping. 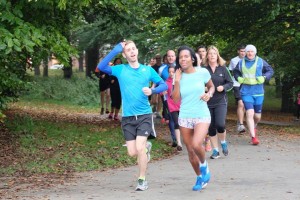 I then went to Parkrun and felt like I was going to die. But I’m a determined little guy and I met my old mate Martyn and did some training runs with him and got my PB down to 23 minutes, my 50 Parkrun T shirt in a year and came second in league table.  I met some amazing people at the DAC 5k, signed up there and with the training just under a year I managed a 19:58 5k PB, ran several 10ks and two half marathons.

I want to get even quicker. Which I will do, when I stop running into things, not tying my shoe laces properly or injuring myself.