In March, Isle of Wight based Run England group Love Running were invited to nominate their Tuesday Nighters for a Community Action Award.

Community Action is a local group that reviews and encourages voluntary organisations in all spheres of life, and rewards those it feels are doing a particularly good or useful job. Because the group is free of charge and run entirely by volunteers they were deemed worthy participants!

Jo Randall and her husband Simon Randall started their running group from their shop - Love Running, in Newport. IOW over 4 years ago. They have over 200 members registered with Run England, and are growing more and more each year.

Jo explained the process, "A team of judges came round for an interview and asked all sorts of questions about the group, the type of people who attend and how we operate (it was a bit scary!), and then we were invited to an official awards night in April."

She continued, "Thinking we were up against parkrun, the local foodbank and other brilliant organisations, we didn’t think much of our chances, but it was lovely to be nominated.  Four of us were invited to represent the group, so we took Keith Wolton and Nicola Henry-Mildenhall with us as our main regular volunteers, and it was a rather posh wine and nibbles affair!"

The 24 nominated groups were split into 8 categories with 3 in each category, and Love Running were in the “sport” category and won first prize including a cheque for £300!

At the same event, athletics stalwart Ray Scovell won the judges' Special Award for Outstanding Volunteer.  As well as being heavily involved in Athletics on the Isle of Wight, he's also volunteers with the Medina IOW parkrun. He won the England Athletics SE regional Services to Athletics award in 2011. "Ray is a powerhouse to local athletics and a great supporter to Island Run Leaders."

The group Run Leaders are very appreciative of all the support and advice through the years; "We are loving what we do and are proud to be Run Leaders!" 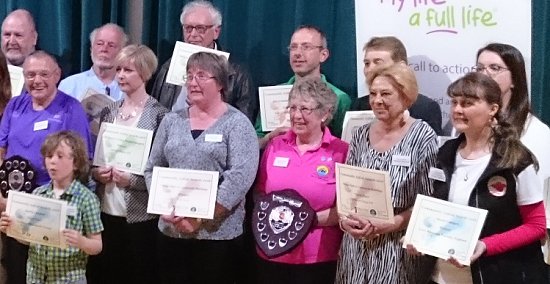