Last October Wiltshire and Swindon Run England Activator Amy Chalk met with a group of keen runners from npower Swindon to see if she could help them introduce new runners from their workforce to the in-house running club.

Amy visited the energy provider's offices in Swindon one lunchtime to talk to employees about the course and encouraged them to sign up, by the end of the session 40 had signed up; some were complete beginners and others were returning to running.

A couple of months later, Amy delivered a 9-week couch to 5k beginners' course with the aim at the end of the course to complete the annual in-house Macmillan 5k run.  Amy told us, "The course went really well, we were very lucky to have the beautiful Lydiard park within a 5-minute walk away, as my runners progressed from week to week we were able to access more of the park.  There was a positive vibe within the group which continued throughout the week by them buddying up to do the homework that I set them."

The running club created a rota to ensure a member was there to assist at each session and this led to a positive relationship being built between the beginners and the running club members. On the day fo the 5k / 10k run event the group looked great in the Green Macmillan t-shirts as they set off. The route took them yet again into the familiar surroundings of Lydiard park and they all completed the 5km distance. The 72 runners raised £1,665.84.

One of the participants said, "Running helps me feel better, getting that buzz from running for longer than what you ever thought you could do, feeling like your body has done something.  I've toned up and I'm looking and feeling healthier - a real confidence booster!"

Another added, "A BIG thank you to you for making me realise I can run, giving us the confidence to run if we felt like giving up, and for some great tips.  I will keep running and I already want to beat my time next year at the Macmillan 5k!"

Amy concluded, "My runners were delighted to finish their first 5k - they are determined to continue running and are now going to be joining the in-house running group.  It really is lovely to hear about the positive impact the course has had and what running has given them." 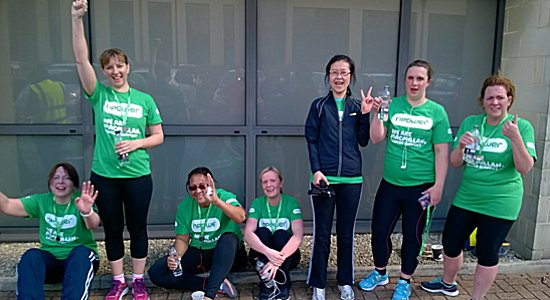