Like many beginners, Louise Woollacott, 60, from Corby, found running tough for the first few weeks. However, with the support of the local Jog Northants programme, she not only continued running, but this year completed the Virgin Money London Marathon. To add to the achievement, it was shortly after her 60th birthday and just over one month since her husband passed away.

Below, Louise tells her story in a guest blog for Run England:

I heard about Jog Northants through my local Slimming World group as a friend had joined the beginners jogging group the year before and was so enthusiastic about it that I decided to give it a go. I joined in January 2014 and started a 10 week course to take me from 'couch to 5K'.  Weeks one and two were enjoyable but by week three, I was in tears and couldn't believe I would ever run 5K. I had started slowly, walking for two minutes and running for two minutes.

The leaders and members of the previous year's group were great at keeping me and the rest of the group going and in April, the day before my 59th birthday, I ran my first ever 5K. It was suggested that we all take part in the Northamptonshire 5K Series and over the following few months, I ran 5K in Corby, Kettering and Northampton, getting faster each time.

In the meantime, I had the mad idea that a dream of mine might just be a reality if I really tried hard. Ever since the London Marathon started, I have been fascinated by it and always said I would love to run it. However, I have always struggled with my weight and never thought it would happen. Since joining Slimming World and Jog Northants, I had lost 3.5 stone and also had a new burst of energy.

I was very brave and entered the ballot for a place in the 2015 Marathon having only run a couple of 5Ks. The leaders of our group agreed to continue with our weekly meetings and took us to 10K then the rest of the group were happy to stay at that distance. I continued training through the summer, increasing my distance, and ran the Peterborough Half Marathon on 12 October - nine months after the night I cried having run for only two minutes!  Although I wasn’t successful in the London Marathon ballot, a local charity Headway East Northants, offered me a charity place. 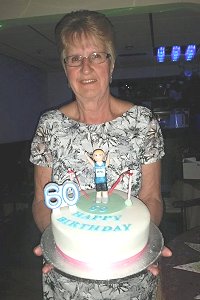 My 17 week London Marathon Beginners' Training Plan began on 29 December and having run three times a week for almost a year, I found it easy to follow. Everything was going to plan, and then, on 6 March, after a long illness, sadly my husband passed away. I was faced with a dilemma - do I postpone the marathon or continue? After lots of discussion with my family, we decided my husband would be happy for me to continue as he knew how much it meant to me and I had trained so hard, so it would be a shame not to do it. It was also the 35th Anniversary of the London Marathon and it would take place just two weeks after my 60th birthday! My training suffered as I wasn't always in the mood to run but I did get to 16 miles and was confident (determined) that I could finish in six hours.

I am proud to say that I have the medal and the t shirt having run the 2015 Virgin Money London Marathon in 6 hours 27 minutes and seven seconds (I'm sure I could knock half an hour off the time for toilet queues)! The memories of that day will live with me forever and I also raised an amazing £2,500.

Photographed above right is Louise at her 60th birthday party with her custom made cake, complete with Jog Northants vest and marathon number. Above centre is Louise (number 1259) and the rest of the ‘Body Magic Marvels’ jogging group after running the 5K at Kettering as part of the Northamptonshire 5K Series.