Runners in this Sunday’s Virgin Money London Marathon are being encouraged to cross the Finish Line hand in hand with another runner in honour of the event’s first ever winners and to mark the 35th anniversary of the race.

Dick Beardsley and Inge Simonsen were the joint winners of the men’s elite race at the inaugural London Marathon on 29 March 1981. Having battled stride for stride for 26 miles, the pair famously agreed to a dead heat, crossing the line hand in hand, a gesture which has come to symbolise the spirit of the event.

It was a fitting reflection of one of the London Marathon’s original pillars, established by race founders Chris Braser and John Disley, “to show mankind that, on occasion, the ‘family of man’ can be united”.

Driven by a social media campaign on Twitter, the aim is to encourage runners to state who they would most like to finish the race #handinhand with, and to cross the line on The Mall #handinhand with a fellow runner on Race Day. 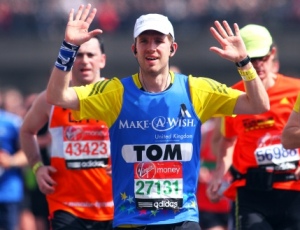 “The image of Dick Beardsley and Inge Simonsen crossing the line together 35 years ago immediately came to be seen as a fitting symbol of the event,” said Virgin Money London Marathon Race Director Hugh Brasher.

“Their gesture of friendship has endured over the years and we are delighted to celebrate it in 2015 as we mark our 35th anniversary. We realise that all the runners in this year’s event will have their own personal goals, whether that’s a finishing time or a fundraising target, but we hope that many of them will enter into the spirit of this campaign and make 2015 the year of hand in hand gesture.”

Around 37,000 runners are expected to visit the London Marathon Expo over the next four days to pick up their registration packs, including their race numbers and Ipico Sports Timing tags, before registration closes at 17:00 on Saturday, 25 April. There they will find the #handinhand message integrated into the event’s branding, while on Race Day there will be reminders on banners across the course and down the final 365 yards to the finish gantry.

The campaign is also being supported by London Marathon’s elite runners at their press conferences this week, as well as the many celebrity entrants and fancy dress costume wearers who will be chasing Guinness World Records on Sunday.