The third edition of the Bupa Westminster Mile on Sunday 24 May 2015 will celebrate when thirty years ago, Steve Cram shattered the world mile record in the Dream Mile at Oslo’s famous Bislett stadium. His mile time of 3:46.32 still stands as the British record.

Runners of all ages – from elites to families with young children – contest a series of mile races (organised by The London Marathon Ltd) in St James’s Park, starting on The Mall and finishing in front of Buckingham Palace.

"The mile is the perfect distance for any age and any ability,” said Cram. “It’s wonderful to see so many young athletes here today inspired by what I did 30 years ago. I’m looking forward to seeing thousands of runners, young and old, running the mile in May." 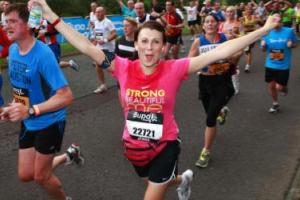 Why not run with your Run England Group, or use it as an event to aim for if you are a beginner?

"We have set a target of 9,000+ entries for this year to make this the biggest timed mile event in the world,” said Event Director Hugh Brasher. “In support of the This Girl Can campaign, there will be a number of all-female races for girls and women of all abilities, including the opportunity for mums to run with their daughters, sisters, friends and family."

Saj Arshad, marketing, sales and strategy director for Bupa UK said: "The Bupa Westminster Mile has become renowned for encouraging people of all ages to get active, have fun and feel great, whether they're competing or spectating – and that is what makes it a unique event which Bupa is proud to support."

Entries for the Bupa Westminster Mile are now open. There are races for families, adults, female-only (This Girl Can), veterans, juniors, elite athletes and senior and junior wheelchair users.  There will be a series of races throughout the day on Sunday 24 May 2015 and runners will be seeded according to predicted finish time, so entrants will be running with people of a similar standard.