The London 2012 Chairman was joined by fellow Olympians, Brendan Foster and Sharron Davies plus Jim Ratcliffe, the charity's founder (pictured, below), as well as a number of celebrity supporters.

Around 500 children took part in the fun run, all wearing Go Run For Fun t shirts. Following the run, the children were presented with medals from some of the stars in attendance.

The GO Run For Fun Foundation is a new charity aimed at encouraging Britain’s five to 10 year olds to take up running.

The Foundation’s national launch took place on Thursday, 1st May at the Queen Elizabeth Olympic Park and followed the decision by INEOS, the chemicals company run by Jim Ratcliffe, to donate £1.5 million of seed funding to the charity. 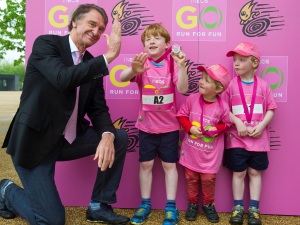 It was a major event with Lord Coe leading the celebrations alongside fellow Olympians, Brendan Foster and Sharron Davies plus a number of celebrity supporters, including Ricky Rayment from The Only Way Is Essex and Jamie Laing and Ashley James, of Made In Chelsea fame.

Coe said: “GO Run For Fun aims to help children get more exercise and have fun at the same time. It’s a great new initiative and I am pleased to be supporting it. The Government and the Mayor Of London recently launched the ‘Moving More, Living More’ campaign to get people more active as the physical activity legacy from the London 2012 Games. Initiatives like GO Run For Fun can help us achieve our long term vision of a fitter nation."

GO Run For Fun recently commissioned a You Gov poll that found that a massive 77% of people thought children should get more exercise.

Dr Adam Carey, a fitness expert with CorPerformance, said: “Studies show most children aren’t getting enough exercise and GO Run For Fun is a great way to help parents, schools and clubs tackle this issue."