Congratulations to Run England Macclesfield group leader Neil Gunn who overcame injury to complete the Virgin Money London Marathon in a personal best time of 3:24:18 after missing out in 2013.

Neil was one of two winners, in our Virgin Money London Marathon ballot for group leaders earlier in the year. He is a group leader at the Macclesfield Run England group which is linked to Macclesfield Harriers & AC where runners can progress from being beginners to joining one of the other groups at the club. The group has its own blog which you can view at www.macclesfield-run-england.blogspot.co.uk.

Neil cruelly missed out in 2013 due to an Achilles injury, but his preparations went well this year with almost all his planned sessions completed and he enjoyed tapering off during the final week before race day.

Here's Neil's blog on the experience: 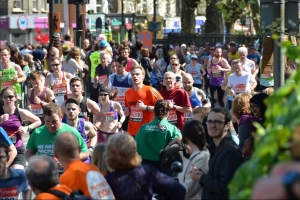 "After weeks of training the big day finally arrived. I was staying with friends in north London and woke early to see clear skies and sunshine – perfect conditions!

After a pre-race breakfast of porridge, honey, fruit and bananas I headed off to the Red start area in Greenwich. I could sense that I was in for a great day as the tube and over-land trains were packed even at 7am in the morning. The organisation of the start was excellent and at 9.30am I handed over my kit bag into the baggage trucks knowing that I would not see it again until after the race.

At 10am exactly the race officially started and for what seemed like an eternity nothing happened and then slowly we began to ‘shuffle’ forwards and finally, after almost three minutes, I crossed the timing mats and pressed ‘start’ on my Garmin watch and started to run.

I had trained for about 8 minutes per mile pace and although it was tempting to push faster (why do we do that?) the crowded route made it impossible and so for several miles I kept to my plan. The weather and support from the crowd was perfect as mile after mile passed by. This was my second attempt at the London Marathon and so, as I knew the route a bit better, I was able to take all the sights in as we passed.

The runners started to spread out a bit more as we approached half-way just after Tower Bridge and it was noticeable that people were slowing down and a few were moving to the side as cramp set in. I used the water and feed stations to stay well hydrated and my supply of jelly babies (one every two miles) was good. 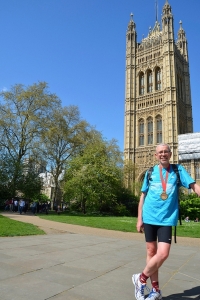 I had arranged to see my wife, Alison at mile 14.5 and 20.5 but the number of spectators was so great that I thought it was unlikely that I would see her – but, amazingly, I did see her and what a boost it gave me to get a hug and more jelly babies.

By mile 20 there was a noticeable drop in pace from a lot of runners (possibly due to the sunshine and warmth) but I was continuing to feel good so increased my pace a little and felt fine as I passed a lot of people with the crowd cheering me on. I kept checking how I was feeling as I did not want to find myself in difficulty and amazingly I continued to feel fine all the way along the Embankment, past Big Ben and towards the finish.

It was a very emotional moment as I turned the last bend and saw the finish line and I pushed as hard as I could with a feeling of euphoria as I crossed the line in 3:24:18 – a ‘Personal Best’ by just over three minutes. After 26.2 miles of non-stop running it is a strange feeling to just stop but the amazing feeling continued as all the finish marshals gave their congratulations. I spent the rest of the day on a complete ‘high’ after such a great experience – the whole organising team, marshals and spectators made this a day I will never forget."

From all of us at Run England - congratulations Neil!

If you were inspired by the London Marathon, why not start running with a Run England beginners group! Find your nearest group at www.runengland.org/groups.