Following a number of successful workplace running groups in the city, Run! City – Bristol has launched a new workplace running programme which aims to get more organisations enjoying the benefits of running during lunchtimes or after work.

In the last 12 months England Athletics have supported a number of organisations, both large and small to realise the benefits of setting up workplace running groups. Most recently employees at the Microsoft offices situated in the Bristol Prudential Building and employees from Lloyds Banking Group based on Bristol Harbourside have enjoyed the benefits of running in their lunchtime.

City Activator Anna West said: “Developing workplace running groups in Bristol has been fantastic. Through working closely with Microsoft and Lloyds Bank we have been able to develop and deliver both intermediate and beginner running sessions. It has been extremely rewarding to see employees progress from beginners to now feeling confident to run their first 5K.” 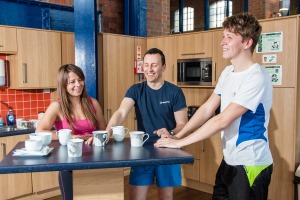 Workplace running groups offer a great way for employees to fit regular exercise into their busy working lives. It’s also a great way for staff to get out of the air-conditioned offices, away from the desk and the computer screen for half an hour.

With a number of national workplace health reports showing a fitter, healthier workforce can reduce absenteeism and even improve productivity and staff morale there are clear benefits for employers as well as employees.

Lunchtime running groups have proven popular with a number of local and national organisations with access to shower and changing facilities. Whilst after work running groups are a great way of avoiding the rush hour traffic and getting your exercise in before you get home and put your feet up!

Run! City-Bristol is looking for enthusiastic runners to become ‘Workplace Champions’ to promote running in the workplace.