Thursday 2 October marked the 10th anniversary of parkrun - the free, weekly, timed runs which see tens of thousands of people taking part across the World every week.

Since 2 October 2004 when the very first event was held with 13 people taking part at Bushy Park, Teddington, 5,135,983 runs have been logged in parkruns in the UK alone, and the series has grown to include weekly events in ten other countries around the world including in Australia, the USA, Denmark, Russia and South Africa.

Following that first parkrun it was over two years before a second event was set up – this time at Wimbledon. Since then the number of parkruns has continued to grow and there are now more than 240 parkruns taking place in England alone each week. In 2013 junior parkrun events were created, taking place on Sunday mornings over a distance of 2K.
England Athletics Chief Executive Chris Jones said: “It is always great to see people with an enthusiasm for the sport being innovative and putting their ideas into action – that is exactly what we have seen with parkrun. 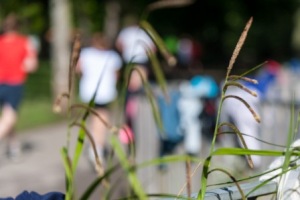 “In the ten years that parkrun has been going it has made a huge difference to athletics in England. We know many of the events are supported by clubs and they offer many people, particularly beginners or recreational runners, a taste of what running can offer them. The opportunity to run a well organised, timed event and meet other people who also enjoy running is a great way of introducing new people to running and support existing participants. For many it is a valuable first step towards a more formal involvement in the sport.”
Managing Director of parkrun UK, Tom Williams, said: “It gives us great pride to see so many new faces turning up on Saturday and Sunday mornings across the UK. With over 1,000 new people registering with us per day we are confident of seeing a large number of those progressing to enter races, join clubs and become amazing volunteers across all aspects of the British running community. The future of running in this country has never looked brighter and we are excited to be part of that.”