Three new AthleFIT sessions and a workplace running initiative by Manchester City Council have given the people of Manchester plenty of reasons to stick to their New Year's Resolutions in 2014.

All three Manchester AthleFIT sessions started in January to help give people in the city a New Year fitness boost! One of the new sessions is held in North Manchester, while the other two are in East Manchester.

AthleFIT is England Athletics' project which brings athletics to the people in a fun, vibrant, inclusive 'circuit training' format using core athletics skills of running, jumping and throwing in places where people feel comfortable. AthleFIT is also a great supplement to add to a running routine.

Donna Young - a qualified group leader - leads the North Manchester session every Monday evening from 6pm to 7pm at Blackley Youth Centre. The first session took place on 13 January 2014 and 20 people took part, many of whom already ran in Donna's group and wanted to add another element to their fitness regime. 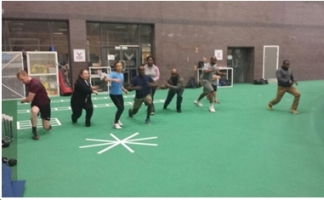 Manchester's second AthleFIT session started on Tuesday 14 January and runs every Tuesday evening from 5pm to 6pm at the SportCity regional athletics arena in East Manchester. The session is run by Manchester City Council's Dorretta Maynard to cater for parents with children taking part in kids community sessions which take place at the same venue. The first session saw 10 parents attend with many more interested in the sessions as well as the Walk 2 Run groups which run alongside.

Wednesday 15 January saw the third AthleFIT session of the year, again running from 5pm to 6pm and delivered by another qualified group leader, Debbie Beresford.

But it's not just AthleFIT sessions that are helping people get fit in Manchester this year. Manchester City Council staff have been bitten by the #runningresolution bug and have made great strides towards improving fitness within the workplace with new running groups being set up.

More than 30 staff from various Manchester City Council departments have expressed an interest in taking a LiRF (Leadership in Running Fitness) course and becoming qualified group leaders following the creation of five separate running groups from different sites across the city, including Manchester Town Hall and Greater Manchester Police. This is an excellent initiative for council staff who are keen to start leading and there will be weekly staff sessions at least four days a week.