Runners in the 2013 Virgin London Marathon set yet another record figure for charity fundraising with £53 million being raised for good causes at this year’s race.

It is the seventh consecutive year that London Marathon entrants have broken the Guinness World Record for charity fundraising at a single annual event worldwide and brings the total raised for hundreds of charitable causes since the race began in 1981 to more than £663 million.

The average raised by every London Marathon Golden Bond charity runner increased to £2,535 – up from £2,345 in 2012 and the second highest amount in the history of the event.

There were 34,278 London Marathon finishers on Sunday 21 April 2013, with 75 per cent of these runners raising money for good causes and bringing the total to 888,873 runners who have now completed the race, since it started 32 years ago. 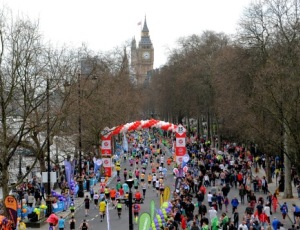 Virgin Money London Marathon race director Hugh Brasher said: “We are delighted that this year’s amazing London Marathon runners have, once again, raised a record-breaking amount of money for charity.

“This impressive achievement is testament to the enthusiasm and dedication of our runners. To raise this record-breaking amount in the current economic environment, at the same time as achieving their own marathon goals, shows that London Marathon finishers are among the most committed runners in the world.”

“Virgin Money Giving, our not-for-profit fundraising website, has made a big contribution towards hitting that target with over £60m raised for the London Marathon since its launch. It is fantastic that, despite challenging economic times, we’ve continued to see such phenomenal fundraiser commitment and generosity.” 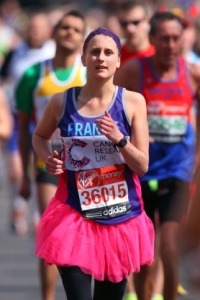 The 2014 Virgin Money London Marathon is on Sunday 13 April 2014, and the official charity will be Anthony Nolan: www.milebymile.org.