The free race places are being offered across the Bupa Great Run 5km events, including the Bupa Great North 5km on Saturday 14th September, to get more people physically active.

The race places are being targeted specifically at first time runners of all abilities who have never previously taken part in a Bupa Great Run series event, to help prompt them to get and stay active.

Regular runners are also being encouraged to sign-up friends and family members who have previously spoken about their desire to start running to inspire them to get started.

The event could well be an ideal target for Run England group members, who still have 12 weeks to prepare. 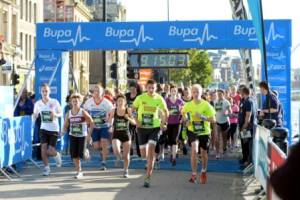 Paula Franklin, Bupa Medical Director said: "Running can have a very positive effect on both your physical and emotional health. We really want to encourage as many people as possible to try running, as lots of people experience great joy and reward from it.

"A 5km event can be a great place to start and has a relaxed and friendly atmosphere. There is no pressure to run and those who prefer can walk some or the entire race. Either way we believe that taking part will give you a general feeling of wellbeing. We hope that by providing free places for first time runners we will encourage more people to be active going forwards."

Individuals can apply for a free race place by visiting www.bupa.co.uk/myfirstrun and submitting their personal details, with the winners being selected at random by Bupa.