Mo Farah: “I’ve learnt the biggest lesson of my life”

Great Britain's Mo Farah ran the first half of Sunday's Virgin London Marathon before dropping out at half way as planned. He admitted afterwards that he'd learnt quite a few lessons along the way, not least how hard it is to reign yourself in when the London crowds are urging you forward.

"The support here today has been unbelievable, and way more than I was expecting," he said afterwards. "The crowds were amazing; they make you want to push on."

Farah, who looked fresh as he stopped at mile 13, used his half marathon outing to learn as much as possible about every aspect of the event before he makes his debut at the full distance in the capital in 2014. 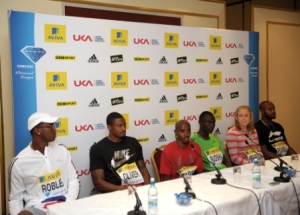 And while the double Olympic champion had no trouble staying with the lead pack as they went through the first half of the race in world-record pace, he did struggle to pick up his drink at a feeding station. "The biggest challenge was picking up the right drink," he admitted. "I made a real mess of it and had to go back. It's really hard.

"I've learned the biggest lesson of my life today. Staying at the race hotel, eating breakfast this morning, getting on the bus to the start, it was all good practice for next year.

"I need to do a lot more training," he added, "but I really appreciate the opportunity the Virgin London Marathon gave me today and I'm looking forward to the full marathon next year."