Kebede and Jeptoo shine in the London sun Ethiopia's pocket-sized power house Tsegaye Kebede unleashed a late surge to regain the men's title at the 2013 Virgin London Marathon as Priscah Jeptoo led a Kenyan one-two to add the women's crown to the Olympic silver medal she won on the same London streets last August.

Kebede produced one of the most dramatic finishes of recent years, coming from nearly a minute behind the leaders at 35km to overhaul course record holder Emmanuel Mutai in the last quarter-mile. He sprinted across the line in 2:06:04, flashing a huge smile and victory sign at the photographers' gantry.

The leaders had gone through half way inside world record pace, but while many of the pre-race favourites wilted over the second half, Kebede judged it perfectly, getting stronger and stronger in the closing miles to claim his second London title.

In 2010 Kebede won from the front in rainy conditions. This time he battled back under cloudless London skies for a victory that looked all but impossible just a few miles earlier.

"I had a little pain in my side in the early part of the race," explained Kebede afterwards. "But as time went on it got better and better.

"I could feel myself getting closer and closer to Mutai and that made me stronger. It was a great day to run the London Marathon, and even better to win."

Mutai took the runner-up place 30 seconds back, while Ayele Abshero ensured Ethiopia had two on the podium for the first time, finishing third in 2:06:57.

While there was joy for Ethiopia in the men's race, there were tears in the women's when their Olympic champion Tiki Gelana was knocked to the ground by wheelchair racers at a feeding station.

Battered and bruised, she kept going to eventually finish 16th while Jeptoo strode away from world champion Edna Kiplagat to win the women's title in 2:20:15, just a second outside the personal best she ran to finish third last year.

"I knew this morning I was going to run well," she said. "There was such a good field you were always worried someone would do better, and it wasn't until around 25 miles that I got my confidence back and felt I could win." 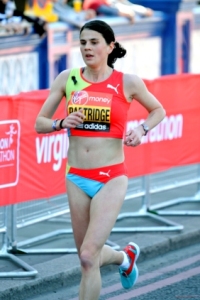 Kiplagat finished second in 2:21:32, taking the runner-up spot for the second year in a row, while Yukiko Akaba sprung a surprise, coming from behind to claim third place in 2:24:43, the first Japanese woman ever to make the London Marathon podium.

There was good news for Britain too as Susan Partridge ducked inside the World Championships qualifying time, while Mo Farah survived intact to half way before dropping out as planned, the double Olympic champion saying he'd learned some important lessons for next year's full marathon debut.

Tatyana McFadden produced the first record of the day as she became the fastest woman wheelchair racer in London Marathon history.

The American celebrated her 24th birthday by adding the London wheelchair title to her Boston victory from six days ago, clipping 29 seconds from the course record in 1:46:02 with the previous record holder, Amanda McGrory, just two seconds behind.

Australian Kurt Fearnley stole the show in the men's race, beating Britain's six-time winner David Weir in an eight-man sprint finish to regain the title he won in 2009.

Weir couldn't find his usual blistering finish and had to be satisfied with fifth as Fearnley crossed the line in 1:31:29 a fraction ahead of Switzerland's Marcel Hug who was second for the second year in a row.

El Amin Chentouf broke the T12 world record on his marathon debut when he was the first athlete home in the IPC Athletics Marathon World Cup. The visually impaired runner crossed the line in 2:24:00 beating his nearest rival by more than four minutes.