Three Ladies at the Slinn Allstars running group recently ran their socks off at the Mad March Hare Event in Swindon.

After being inspired by the Olympics and determined to improve their health and fitness they have been running regularly with their Run England group and seeing the benefits. They all finished the 5K event with big smiles despite the below freezing temperatures.

Amy Hadland describes how running has made a difference to her. "I recently joined Les Slinn beginners' running club so that I could get fit with other motivated people as well as to meet fellow running enthusiasts. 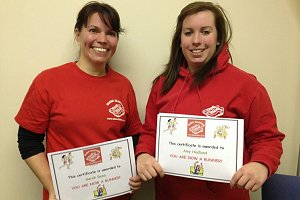 Les Slinn Allstars has given me the motivation which I previously lacked to get out and train. I am looking forward to the summer season of running, including the Mad March run as well as competing every week against my family at our local parkrun.

Before I joined Les Slinn Allstars, exercise was non-existent within my busy schedule; now I exercise at least three times a week! I wanted to join a running group because all of my family are keen runners, also the fact that all beginners are in the same boat really helped my confidence and motivation to succeed. My motivations for joining this club were to lose weight, feel healthier and be able to run 5K comfortably. I have seen a massive change in my energy levels and more positive in my attitude towards exercise as well as in day to day life." 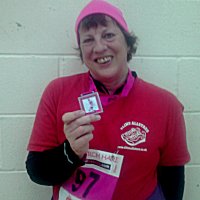 Pauline who is recovering from a recent health scare is enjoying running with other runners, "Until December 2011 I had a sedentary but stressful job as financial director and senior manager of a UK subsidiary of a European company.  I worked long hours and had no time for regular exercise. In December 2011 I was diagnosed with breast cancer and was signed off work for 6 months I was having treatment during the Olympics and spent a lot of time watching it. I was particularly inspired by the Paralympics - seeing the disabilities some of the athletes had overcome made me realise that I could also get myself fit with a little hard work."

So why join a Run England Group?

Sarah knows that it has helped her to commit regularly by running with friends. "I know I can run if I put my mind to it as I have done it before. The club offers me a structured plan to achieve the goal, lots of support and help along the way and it is inexpensive. There is a sense of being part of a team but not competition against each other - the competition is with yourself! Once I complete the course I can run with the club or run by myself."

You can click here to listen to a short mp3 (sound) file on why Sarah and Pauline joined a group.

Les Slinn Allstars have always welcomed beginners and the club has a thriving membership. These three ladies are determined to keep running to complement their healthy lifestyle with the lighter evenings and warmer days to come they are looking forward to their next challenge!