Launched by Colin Jackson in September, the ‘INEOS GO Run For Fun™’ campaign recently celebrated encouraging over ten thousand children to get active and have fun, regardless of ability.

Building on the legacy of the 2012 Olympics, the INEOS GO Run For Fun campaign delivers large and small running events across the UK, to encourage grass roots participation and inspire the next generation of sporting talent.

By partnering with major sporting events such as the Mini Great Run series to driving smaller events held at sports clubs and schools, the aim is that by September 2014, more than 30,000 children aged five to 10 have taken part in GO Run For Fun.

Jim Ratcliffe, owner of INEOS, one of the UK’s largest manufacturing companies who came up with the idea of the GO Run For Fun series said: “GO Run For Fun was born from a passion to get as many children running as possible as early as possible. 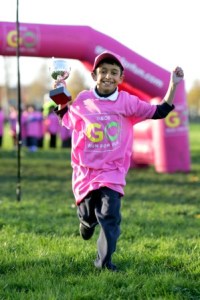 “The campaign is a real team effort and we couldn’t have done it without the hard work and dedication of the team, including the event staff delivering the events, the dedicated teams at local sports clubs and schools, our ambassadors including Colin Jackson, Harry Aikines-Aryeetey and David Davies and, most importantly – the children. To reach the 10,000th runner milestone, so soon, is a sterling effort from all.”

And the children of Bradford played a vital role in helping the campaign reach this important milestone as the 55th runner across the finish line was the 10,000th runner overall (pictured, right).

Chris Jones, CEO at England Athletics, said: “England Athletics is proud of its alliance with INEOS GO Run For Fun and we are delighted to endorse the delivery of this specific initiative that extends coverage of this great sport of athletics to the masses, particularly in their formative years.

“Local clubs are such an integral part of getting young people involved in sport from the grass roots up and through this campaign, we can all come together to be part of a mass movement to get our future generations active and healthy.”

Campaign ambassador Colin Jackson, said: “An active and healthy lifestyle is so important. These fun events are a great way for your kids to get out of the house and have fun with their mates - running.

In 2013, INEOS GO Run For Fun events have taken place across all corners of the UK, including Port Talbot, Isle of Wight and Newcastle – and 2014 will be no different. For more information or to register your local club or school’s interest in joining our campaign, please visit www.gorunforfun.com.