In less than a year Faringdon Far Runners running group in Oxfordshire have gone from nothing to a bustling community of local joggers with something to offer everyone. But how have they done it?

Back in January Ashley Chapman - Activator for the ‘Get Oxford Active’ project in the Vale of White Horse, Oxfordshire - set up Faringdon Far Runners - a new beginner running group which has quickly grown and now caters for more than 50 runners at each session!

The seeds were sown the previous month, thanks to a cluster of local joggers keen to get a regular group started. Ashley was able to support them by setting up a group website, and before they knew it the group had Sunday morning beginner sessions as well as Thursday evening jogs for the regulars.

It only took a month for extra sessions on a Tuesday to be needed as well as ad hoc runs organised through email and the group's Facebook page. Another two group leaders were trained to help with sessions. 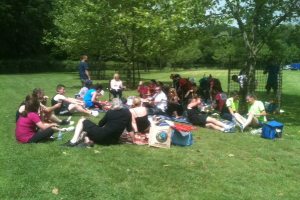 The summer brought even more chances for the Far Runners to run together so early morning jogs, starting at 6.30am, started up and still happen regularly.

Ashley - a trained AthleFIT leader - also introduced the group to a general fitness session with a mixture of interval training, hills climbs and circuits incorporating AthleFIT based drills which was well attended and will restart again in spring when there is more light.

Ashley said: "One reason [that the group is successful] is because of the social element which has included meals out, picnics at jogging events, parkrun meet ups and evenings out locally. But the main reason is because of the fantastic support and commitment from group leaders Marea Brown, Steve Diboll and Andrea Plant."

The group has been a huge success and will form the model for creating more groups in the area. But the real questions is... how far can Faringdon Far Runners go?!