A number of popular faces – from pro boxer Nick Blackwell to TV presenters Roger Johnson and Jeff Browne – turned out to support Run England in its quest to get the nation running at three local launches which recently made local newspaper and TV coverage!

The launches have coincided with the New Year to raise awareness of the England Athletics project for people with New Year’s resolutions to get fit and also come following the news that funding has been awarded by Sport England to a number of County Sports Partnerships charged with creating more running groups across the country, in partnership with Run England. 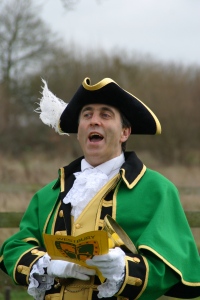 He was joined by Maggie Rae, Corporate Director of Public Health, and Westbury’s Town Crier and Run England member Sean Price (pictured right) who added a West Country feel to the occasion!

The launch took place at Southwick Park in Trowbridge which celebrated its 21st Parkrun on the Saturday morning and is well supported by many local Run England members.

Nick talked about his love of running and how he uses it to support his boxing training. He also talked amusingly about the time he miscounted the laps in a local race and ran out of steam slightly too soon..!

Inspirational runners from the Westbury group Lisa Wrintmore and Jo Wickens also attended the launch. The two women, who are currently undergoing treatment for breast cancer, gave their support to the campaign and talked about how important being part of running groups has been in helping them to cope with the challenge of fighting the disease.

Attending from the Swindon based Slinn Allstars group were friends Michelle Jones and Liz Smith who met through running. The two women had started their journey as complete beginners struggling to complete a mile without stopping, but through the friendship they 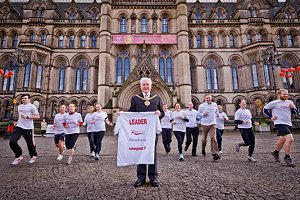 have formed they managed to complete the Swindon Half Marathon back in October. Not content to settle for a half marathon the two enthusiasts  have now set their sights on completing the London Marathon together.

When asked how they managed their achievements Liz simply said: “Everyone is busy in life and we can all find excuses not to run, but you’ve just got to do it. Knowing you have a running buddy who will ask you where you are if you don’t turn up, helps greatly.”

Meanwhile, BBC North West Tonight and former sports presenter Roger Johnson (pictured above left) was the guest of honour for the official launch of Run England in Manchester. 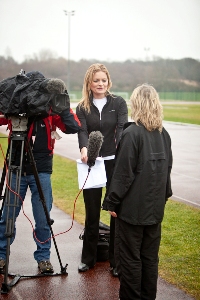 The award-winning presenter joined Lord Mayor Coun Harry Lyons, plus some of the enthusiastic Run England members who have been helped into running by the project, on the steps of the Town Hall to celebrate.

Roger said: “It's great to be chosen to support a programme like this, anything which helps people achieve their exercise goals and keep fit is a good idea and worth supporting.

“I’ve always tried to take part in sport: from five-a-side football to tennis. Running is just the quickest and easiest way to get out for some exercise and definitely best for losing weight – which is a constant battle the older I get!”

Roger said that it can be useful to have people to run with: “Running is normally a solitary thing for me but having company makes it more fun and makes it harder to back out, although I usually lose the power of speech after about a mile!” 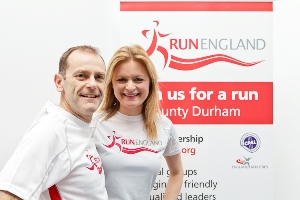 - who are both keen runners - were joined by group leaders Callum Aitcheson and Mark Ketley as well as Run England member Sue from the Freeman Quays running group.

In County Durham specifically, Run England are working with the Changing the Physical Activity Landscape programme (CPAL) to offer residents who are more at risk of cardiovascular disease more support within the region including a wide range of support and info to help them maintain a healthy and active lifestyle.

Listen to the BBC radio coverage from the County Durham launch here.