There are new photo and video resources available for guide running following a filming and photo shoot held by England Athletics in the parkland at Alexander Stadium, Birmingham, with three visually impaired runners and their guides.

Photos and film clips from the day will be used to develop resources to help clubs and running groups to better attract and support visually impaired runners, as well as encourage more people to become guide runners. England Athletics will then work in partnership with British Blind Sport to organise taster sessions for visually impaired runners to help them start running and find a local guide and running club or Run England group.

The resources will include a series of film clips on uCoach.com along with a two hour ‘Sight Loss Awareness and Guide Running’ workshop which will be available from April. The workshop will focus on off-track endurance running and will include information on: 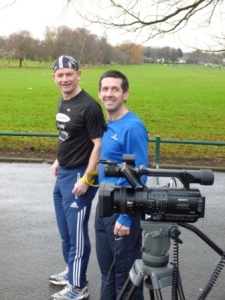 These resources will further support the existing resources available:

England Athletics would like to thank Dave and Tony, Iris and Wendy and Maggie and Tessa for braving the British weather to help us develop these resources!

If you would like to register your interest in attending or hosting a sight loss awareness and guide running workshop please contact Liz Purbrick (England Athletics National Disability Manager, Community Participation) on 07850 514 936 or lpurbrick@englandathletics.org.

If you are visually impaired and would like help to find a guide runner or join a local club or Run England group please register at www.englandathletics.org/disabledathleteinfo.