Cranleigh Sunflowers running group in Surrey scooped not only the Run England Group of the Year Award at the South East Regional Awards held recently, but also came runner up in the Women’s Running Group category at the Women’s Running Magazine Awards.

Graham Jessop, Chair of the South East Regional Council, presented Lucy Bushnell – group leader and founder of the group – with the Run England award. Lucy received funding from Run England Surrey to take the Leadership in Running Fitness qualification and registered her group earlier this year.

It was set up in 2010 initially as a women’s beginners group, but due to its popularity and warmth it now has a mixture of abilities, ages and backgrounds with three opportunities to run during the week, offering something for everyone. 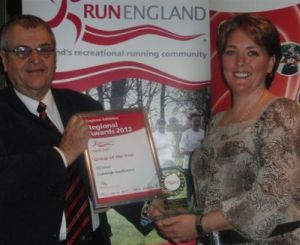 Lucy’s infectious passion, encouragement and support has rubbed off on her group members, with many completing 10k runs within six months of starting. Several have run half marathons and some have even completed marathons, and many friendships have been forged along the way.

The group also helps out at local events and its members are impressive fundraisers, organising many events and they recently ran a combined of 1,000 miles in one day, raising a whopping £4,500 for Help For Heroes.

One member said: “It is such a fantastic recognition of what the group means to us all and shows our appreciation and commitment to the group,” while another added, “Lucy only started running a few years ago as a young mum wanting to get fit.  She understands the struggles that prevent many taking up running and in her indomitable way manages to get women to 'give it a go' and once hooked she keeps them there.”

If you are interested in joining the Cranleigh Sunflowers, simply go to their website and register your interest at www.cranleighsunflowers.com. If you live in Surrey, love running and would like to lead your own group, contact Darryl Gheerawo, Run England Surrey Activator at dgheerawo@englandathletics.org. 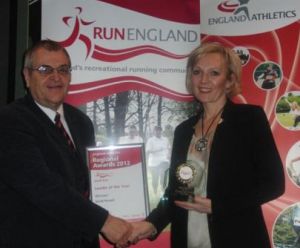 Sarah Russell has 20 years worth of experience as a coach, trainer, athlete and writer. She organises a beginners running group in Tunbridge Wells, providing three weekly training sessions. The group started nine years ago with a group of friends and now boasts almost 300 members with 17 support coaches!

She provides encouragement, motivation and expertise to all her group members who are getting started in running. Her enthusiasm and professional approach enables new runners to build their confidence and fitness within a supervised and friendly environment.

Sarah recently put coaching and support in place for a visually impaired runner, proving that she will make sure anyone can have a go. She also has strong links with local athletics club Tunbridge Wells Harriers, which enables her runners to progress to competitive levels when ready.

As Race Director for the hugely successful Tunbridge Wells Half Marathon, Sarah has coached many beginners through the race, and on top of this, she is the training consultant to a number of charities, including the Dame Kelly Holmes Legacy Trust.

Sarah continues to be an enthusiastic and inspirational group leader while being a busy mum of two boys and faced serious health issues over the last couple of years. She recently shared her skills and experiences with other group leaders at a development workshop for the Kent Running Project, and she presented at the England Athletics Conference in September. 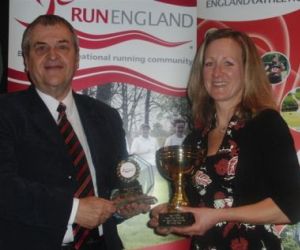 The Kent Running Project – which won South East and the National Run England Project of the Year – is headed by Lucy Tomlinson, Activator for Kent, following Sport England investment.

Lucy has trained 60 newly-qualified group leaders and 50 newly-registered Run England groups (with many more on the way!) after promoting the project at local events and within clubs and community partners. She has also organised social media training and development days for group leaders – which has proved a huge success in inspiring leaders and equipping them with knowledge of best practices and the confidence to try new ideas.

Group leader for South East Striders Sharron Harris succinctly summed up the feelings of leaders towards the Kent project: “Lucy has been fantastic, very supportive and always there to help.”

Congratulations to all the winners and indeed everyone involved in encouraging runners across the country – you’re doing a great job and we really appreciate it!