The ballot for places in The National Lottery Olympic Park Run, which takes place on 31 March 2012, has now opened.  Members of the public have four weeks to apply to take part in what will be the very first public event staged in the inspiring backdrop of the Olympic Stadium.

5,000 lucky applicants will have the chance to be the first runners to cross the Olympic Stadium finish line in this historic five-mile run, which celebrates the contribution of The National Lottery and its players to London 2012.

The online ballot can be entered by visiting www.national-lottery.co.uk/run between now and the closing time of midnight on 27 October 2011.  The National Lottery Olympic Park Run is open to anyone aged 16 or over, of any running ability.  The 5,000 lucky hopefuls chosen from the ballot to tackle the run will also be allocated a pair of spectator passes each to the Olympic Stadium, so that two friends or family members can cheer them on and be part of this memorable occasion.

The five-mile course will traverse the Olympic Park and offer access across it on a scale not yet experienced by the public. The route will pass alongside the other iconic Olympic and Paralympic Games venues that The National Lottery has helped fund and where many elite athletes’ hopes and dreams of London 2012 medal success will be realised just a few months later.  The run will reach its thrilling conclusion on the home straight in the spectacular Olympic Stadium.  Vying to cross the finish line first will also be a host of former and current Olympic and Paralympic athletes and celebrity runners. 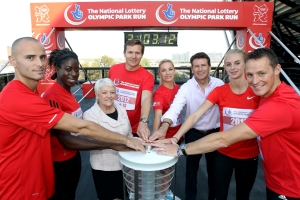 Dianne Thompson, Chief Executive of Camelot, said: “This is a once-in-a-lifetime opportunity to take part in one of the most thrilling events in the run-up to the London 2012 Olympic and Paralympic Games.  The chance to take your place in history as one of the first people to cross the finish line in the Olympic Stadium is what dreams are made of.  The National Lottery is proud to make that dream a reality for those who are lucky enough to win a place in the run.”

Sebastian Coe commented: “The National Lottery and its players have made a significant contribution in helping us realise our vision for the most spectacular Olympic Park, which will leave a lasting legacy for generations to come.  I’m delighted that The National Lottery will give members of the public the chance to be the first to cross the finish line in the Olympic Stadium.”

Christine Ohuruogu said: “The support of National Lottery players in helping athletes fulfil their dreams of medal success in London 2012 and beyond cannot be underestimated. Since the lottery’s funding of elite sport commenced in 1997 it has played a huge role in putting more and more sportsmen and women on the podium for GB. From allowing athletes to train full time, to providing world-class coaches, medical support and training facilities, lottery funding has made the difference. What better way could there be to celebrate the contribution of The National Lottery’s players to British sport than with this historic event?”

The cost of entering The National Lottery Olympic Park Run will be £15 for successful applicants.  This entry fee covers a race number, two spectator passes for the Olympic Stadium, a full information pack, an event T-shirt to run in on the day, computer chip timing for a completely accurate running time, a souvenir finisher's medal, on-course refreshments and a finisher's pack.

The National Lottery is contributing up to £2.2 billion towards the funding of the London 2012 Olympic and Paralympic Games, including the venues and infrastructure where Britain's athletes hope to fulfil their dreams.

Through mainstream funding, The National Lottery enables Britain's elite competitors to train as full-time professionals and provides them with world-class support. From 2006 to 2013, The National Lottery is providing in excess of £310 million to support over 1,200 potential Team GB and Paralympics GB athletes as they prepare for London 2012 and beyond.