Blog from one of our Mental Health Champions

As we focus on World Mental Health Day on Saturday 10 October, we’re featuring a blog from one of our much-valued #RunAndTalk Mental Health Champions - Kate Bone from Muddy Runners. The session that Kate references in her blog below took place before Covid-19 restrictions. 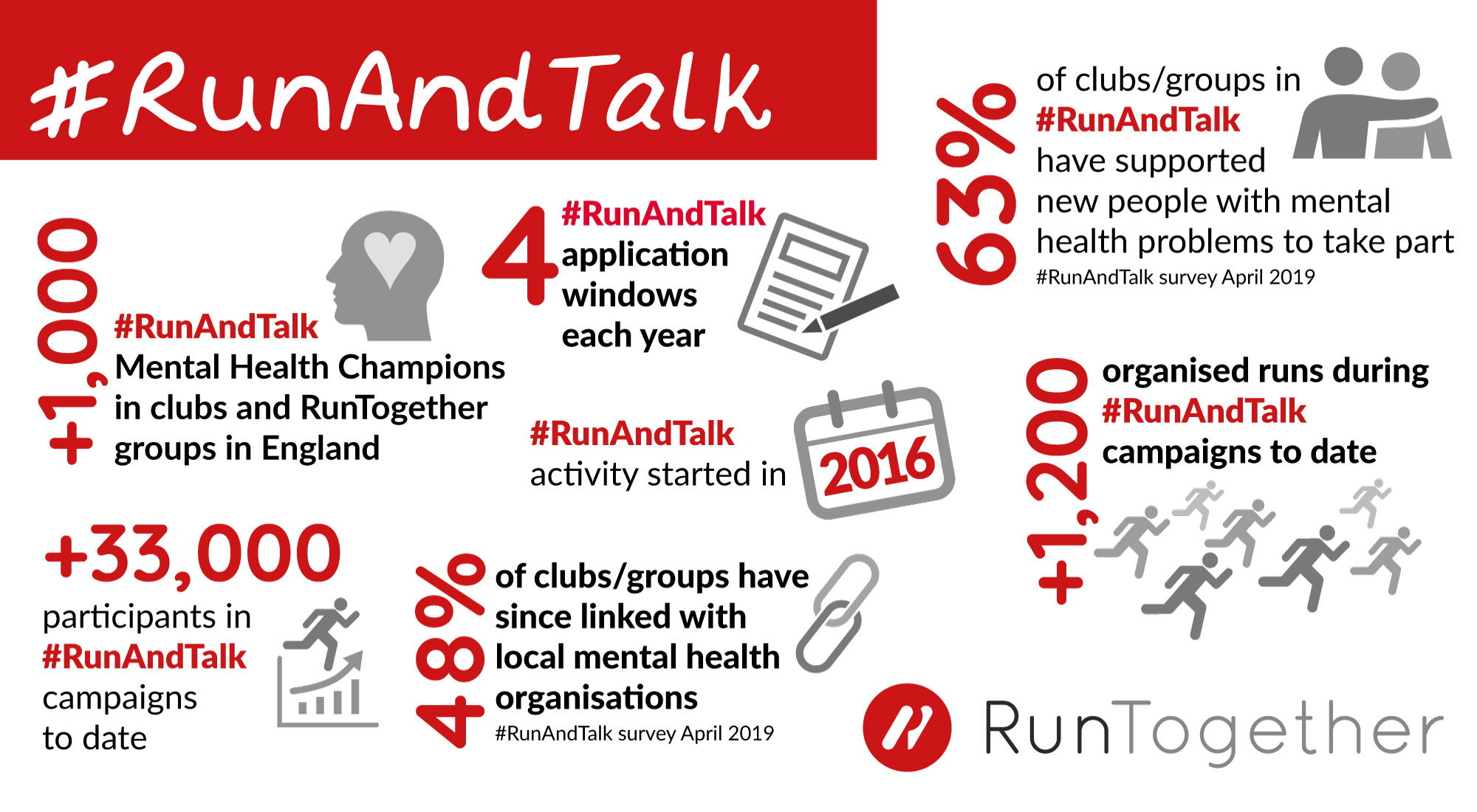 I want to tell you about an exceptional running session, one of the most positive and inspiring runs that I have ever attended. And it was nothing to do with pace, distance or speed.

Our club in Andover, Hampshire is part of the England Athletics #RunAndTalk prorgamme and we have six appointed Mental Health Champions. As such, we regularly host #RunAndTalk events, inviting our club members but also the wider public, and so far these have always been well attended. This particular evening was no exception, with over 30 people braving the hideous weather conditions to come and run, run/walk, or just walk the planned 3k and 5k routes. In the back room of a local pub, I gathered the attendees together before we set off and told them about the #RunAndTalk initiative from England Athletics in conjunction with the Mental Health charity Mind.

I explained that the purpose of our session that evening was to stay together in groups, to get to know each other, and to talk. I explained how we were using this opportunity to highlight the benefits of exercise and movement on mental health, and everyone in the room agreed that, however little they wanted to go out in the first place, or however hard a run felt at the time, we generally all felt better for it afterwards. I didn’t go into the science behind it for fear of boring them all with my favourite topic of 'happy hormones'; I simply asked them to talk to each other, and if they felt able to, and wanted to, to talk about mental health.

So why did I need to give them this explicit instruction? Why was the #RunAndTalk initiative even necessary? 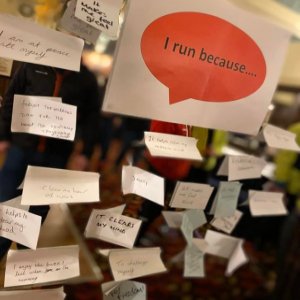 When I was a child, a close family member had a 'nervous breakdown'. I had no idea what this meant, but I could tell from the reactions of others that it was bad, and that we shouldn't talk about it. This was in the early nineties, when the term 'nervous breakdown' was still being used to describe anything from depression, to anxiety, to psychosis or any other psychiatric condition or medical diagnosis. This catch-all, colloquial phrase left me confused and (I hate to admit it) ashamed on behalf of my family, synonymous as it is with connotations of weakness, failure and a 'breakdown' of the 'normal' functioning mind.

For years we have lived in a society where we didn’t talk about mental health. Perhaps it was the British stiff upper lip, or a fear of looking weak. Perhaps it was the media’s portrayal of ‘crazy’ people in psychiatric units, the ‘mad’ and the ‘bad’, and a lack of education and information about what mental ill-health actually is? Or the embarrassment of being seen as different and receiving unwanted attention, or conversely not being believed - the unfortunate consequence of it all being ‘just in your head’?

On the contrary, we are more than happy to discuss our physical ailments with anyone who will listen! How many times have you politely asked someone “How are you?” only to be there an hour later while they regale you with stories of their recent gall bladder trouble or lower back pain? Whilst some may choose not to share quite to this extent, discussing physical symptoms and diagnoses certainly doesn’t come with the same feelings of shame, embarrassment, sadness and confusion that seems to accompany discussions about mental health. It’s bizarre that we openly talk about all other areas of the body, but not what’s going on inside the brain.

The most basic function of the brain is to keep the rest of the body alive. It doesn't get much more important than that, and yet we don’t talk about it.

This 1.4kg or so bodily organ was once regarded as relatively unimportant compared to the rest of the body. The Ancient Egyptians when mummifying bodies would scoop out the brain and throw it away, whilst carefully preserving the heart. Aristotle thought the brain was simply a radiator used to cool the blood, and the French scientist, Descartes, giving it slightly more credence, only went so far as to say it was a form of antenna, by which the spirit might communicate with the body. It is only now that the full wonder of the brain is being realised, with new discoveries about its function being made every day.

At this recent #RunAndTalk event, I was leading the group across a main road when I overheard some of the runners behind me talking. One was speaking openly about her recent mental ill-health, her experiences then and where she was now. This led to another runner sharing details of her own situation, and before long the two were comparing notes and sharing insights into their own lived experiences. This frank and uninhibited discussion was refreshing. Amongst the group listening there was no stigma, no shame, no embarrassment.

Research tells us that this conversation was probably made easier due to the fact that movement was involved, releasing some of those feel-good hormones that I mentioned earlier - serotonin, endorphins, dopamine - but particularly oxytocin, the ‘love hormone’ that can be released when in the company of friends and loved ones. Combine that with forward movement and a lack of eye contact, and you have the perfect recipe for being able to talk openly. 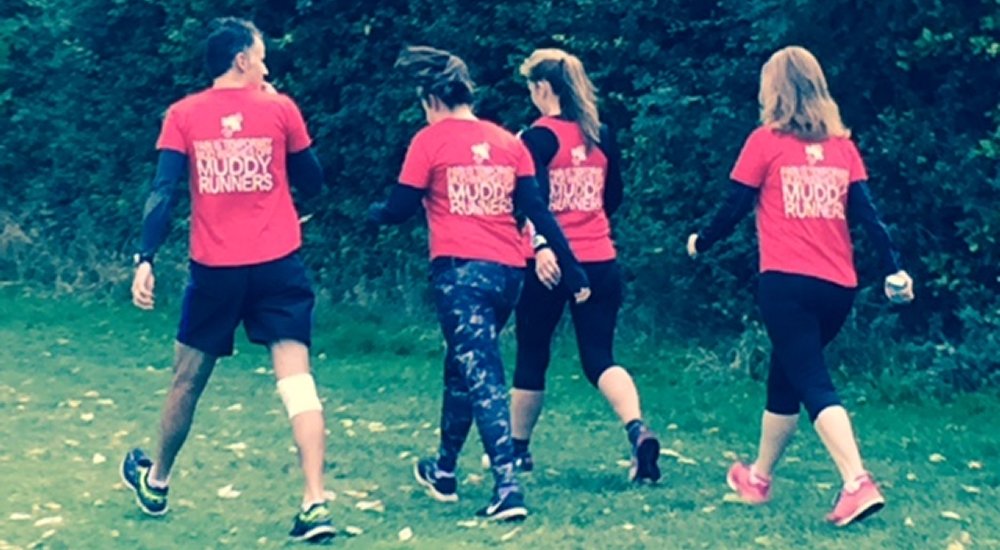 Sometimes a mental health problem can be the elephant in the room - we know about a person’s ill-health but no-one wants to talk about it. Other times there is no elephant - a person cannot or will not speak about their mental health to the point where finding out that an outwardly smiley, happy person is actually suffering can be a complete shock. Ruby Wax, American actress and comedian who herself has depression, said “It’s so common, it could be anyone. The trouble is, nobody wants to talk about it. And that makes everything worse.”

Approximately one in four people in the UK will experience a mental health problem each year, and while this number has not changed significantly in recent times, it appears that how people are coping with mental health problems is getting worse, as the number of people who self-harm or have suicidal thoughts is increasing.

If we have any chance of fully understanding the myriad of experiences endured by those with mental ill-health, we have to talk about it. We have to shake off the stigma, break down the barriers, and put mental health on a par with physical health. 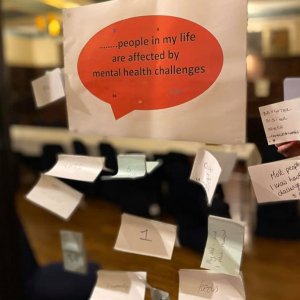 Saturday 10 October is World Mental Health Day 2020. It will no doubt look very different to previous years, but is arguably the most important one yet. As a club we won’t be hosting our usual large #RunAndTalk sessions. However we will be asking all our runners to #DoOneThing. Maybe they will lace up their trainers again for the first time since lock-down. Maybe they will encourage a friend or family member to go for a gentle walk.

Maybe they will do something at work or at home, start a conversation, ask someone how they are. And then ask them again.

Whatever it is, we will support them to make a positive change, to take that first step in supporting themselves or somebody else.