Group activities including warm ups, drills, and exercises were all filmed and photographed.

Afterwards the Group Leaders along with some of their members were interviewed, and asked to talk about their experiences of being part of a Run England group. 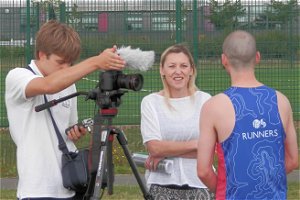 Katharine Jones from Sport Hampshire and Isle of Wight spoke generally about Run England and the benefits of joining a group to help train new runners and encourage them to target their first event. She also explained how you train to become a Group Leader, and the support and advice that is available to all our Leaders.

We are hoping that this collaboration will prove successful in promoting Run England - especially workplace running groups, as well as help publicise the popular 10k and HM events.