Support for Run Leaders in Wiltshire and Gloucestershire The dark evenings may have drawn in and the weather deteriorated, but the enthusiasm from Run Leaders in South Gloucestershire and Wiltshire continues to shine brightly. Two mid-week Run Leader Forums held on consecutive evenings attracted 38 Run Leaders from across the region.

Both forums included a mixture of practical activities, presentations and discussion and were made possible through partnership work. South Gloucestershire Council and Active Lifestyles Team Leader Brian Gardner being the driving force in the South Gloucestershire area. Whilst in Wiltshire both Wiltshire Council (Alex Muse) and Wiltshire & Swindon Sport (Dominique Oughton) have provided invaluable support to the Run England programme. 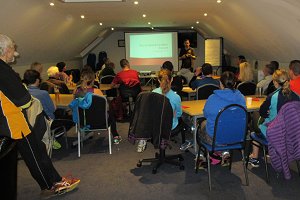 At the South Gloucestershire Forum in Yate, Helen Newberry (Run City! Bristol Activator) coordinated an evening that included an interview with Run Leader Cathie Walsh. Cathie shared an emotional journey from beginner runner to Run Leader, reminding everyone just how life changing running can be. In just over 12 months Cathie a self-confessed anti-runner at the outset explained to the group how she had gradually been drawn into the joy of running through the supportive Frampton Cotterell Run England group. She had lost nearly 4 stone, re-connected with her teenage son and developed her own self-confidence taking part in a range of events and races and more recently becoming a run leader. Cathie now runs School Gates sessions connecting with other mums. There were a few watery eyes in the room as Cathie told her inspiring story! Click here to read Cathie's full story in our news section.

The Wiltshire Forum was held at Trowbridge Rugby club, which is also the club house for Avon Valley Runners. Ian Isaacs from AVR shared his experiences of how the club's beginners' sessions have become so successful, with over 200 new to running this year. He explained how the club manages many different abilities and there was a great discussion between the leaders about how other groups did this too.

Michelle Coveney an experienced leader from Sutton Benger talked about the benefits of doing her Coach in Running Fitness (CiRF) qualification. Michelle explained the pathway she had taken in her coaching and explained the positive effect that the knowledge she has gained had benefitted her running group.

Leaders also benefited from practical support; Club & Coach Support Officer Charlotte Fisher took the South Gloucestershire leaders through a range of activation exercises, drills and session ideas for mixed ability groups. Yate & District Athletics club hosted the evening in their club house and allowed participants to use their track for the practical session which was a first for many of the leaders.

Wiltshire Run England Activator Amy Chalk took the practical session in Wiltshire. Weather conditions were somewhat less favourable by the Thursday evening with wind and driving rain to contend with, but this didn’t stop the leaders enthusiastically throwing themselves into the practical session. Amy Chalk noted, "We had great fun in the practical session although got a little soggy! I have had some great feedback that the leaders have taken away some fresh ideas to pass onto their groups. I realise that leaders put so much voluntary time into their groups so I really wanted to make the evening as useful and informative as possible. Wiltshire have had over 700 newly registered runners so far this year - no wonder the running is booming in the county, this is due to a fantastic group of enthusiastic leaders."

Helen Newberry said, "It’s been great to get the leaders together so that they can meet one another and share experiences and ideas and form a supportive network.  Both new and experienced leaders from a variety of groups were at the session and all went away full of enthusiasm and sharing ideas. It was a very positive night for all involved and represented a thriving running scene in South Gloucestershire."