When Lynne Wheeler joined her local running group as a beginner runner back in 2012, little did she know that she'd be setting up and leading her own running group a few years later.

Lynne stated, "I started running with a beginner group in Sevenoaks and really enjoyed the sessions.  I was truly inspired by the Run Leader there and I began to love running." 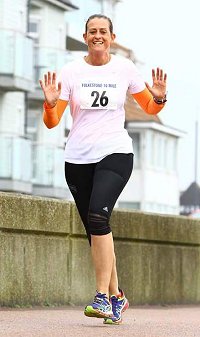 Since taking those first few steps, Lynne has gone on to complete three marathons and recently attended the England Athletics Leadership in Running Fitness Course to become a qualified Run Leader herself.  Working with the registered Group: So Let's Go Running based in Dartford, she has set up a satellite group in her home town called So Let's Go Running - Gravesend.  Her sessions offer people the chance to learn to run in a friendly and supportive environment.

Lynne commented, "Since starting the Group in Gravesend, I now have 22 regular runners.  The sessions take place every Thursday and they cater for all abilities from beginners through to people training for marathons. I have just started offering some speed/ interval sessions which seem to have interested a few more people.  I'm really looking forward to growing the group and developing the sessions over the coming year".

Like many qualified Run Leaders, Lynne finds the sessions very rewarding and she really enjoys the fact that she's able to support other people to take up running. She understands first hand, the journey that they're going through and is keen to help them along the way.

Rita Ramsdale, (pictured top) who recently joined Lynne's sessions said, "I don't know why I decided to start to run as it has always been one of the things I hated the most... But I did try, and from that first day something changed. I still can't really explain what it is, but the energy I feel when I get back home after a session is good enough for me to want to go again... "

Teresa Hubbard, (pictured top with Rita) another member of Lynne's Group commented "Me Run?! I'm 52 and have a dodgy knee but I thought I'd have a go.  To be honest I didn't expect much.  On my first week I walk-ran 4k in 40 mins and I thought "that's promising". By my fifth week I was still doing a walk-run plan but my time was 33 minutes and I was amazed!  I'm really keen to keep this going and I'm even seriously thinking about a marathon in 2017 so I'm definitely feeling motivated".