The Run! City Project was launched in Bristol in conjunction with the visit of Queens Baton Relay in June, giving everyone a chance to get running!

The Queen's Baton Relay is a tradition of the Commonwealth Games and symbolises the coming together of all Commonwealth nations and territories in preparation for the four-yearly festival of sport and culture. The Glasgow 2014 Queen's Baton Relay is the curtain-raiser to the XX Commonwealth Games. Over a period of 288 days the baton will visit 70 nations and territories, cover 190,000 kilometres and involve a third of the world's population, making it the world's most engaging relay. 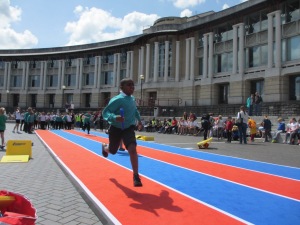 The Baton was carried by four local sporting heroes with the Millennium Square and Amphitheatre transformed into a sports park. The 30m pop-up track proved popular offering 3000 school children the opportunity to try a variety of fun relay races in the afternoon. The organisers also encouraged school children to have a go at speed bounce and the target throw which also proved popular.

In the evening the sports park was open to the public and local businesses who were invited to try the 50m running dash. Everyone got competitive as they tried to top the leader board to find Bristol’s fastest male and female.

The event attracted Team GB Olympic Gold Rowers Heather Stanning and Helen Glover who took part in some sporting challenges within the sports park. The event also saw the Run! City Project for Bristol launched with people encouraged to sign up to receive information about recreational running and athletics opportunities in Bristol. The project aims to promote and increase recreational running opportunities in the city. Over the next year the project hopes to engage with a variety of partners and organisations to entice more people into running.