Whether it is leading European media on a run from a basement or getting people in the community making 300 signs to be used on the Virgin Money London Marathon course, Charlie Dark of Run Dem Crew is getting people on the move.

Somewhere in a basement off Southampton Row, London, a group of people were gathered. With Charlie this can mean only one thing, he wants to get them running.

The groups is mostly members of the media there for a Nike product launch, also there are marathon world record holder Paula Radcliffe, as well as upcoming international athletes Charlie Grice (Club: Brighton Phoenox Coach: Jon Bigg) and Jessica Judd (Club: Chelmsford, Coach: Rob Denmark) but it is Charlie who is enthusiastically putting everyone through their warm up.

Those who have been to a session with Run Dem Crew will know what to expect, but for some it is clear this is running, but not as they know it! The England Athletics affiliated club does things a little differently to most. Charlie is enjoying himself, “It’s great. We always say the Run Dem Crew is the crew for people who think they don’t like running. We hope they fall in love with running by being with us. We show them it is all achievable.” 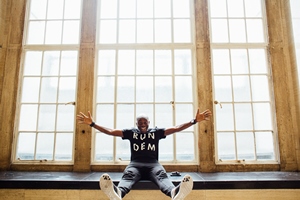 It is hard to see how people would not enjoy running with Charlie around, the running is just part of the whole experience, “It is about the other stuff you do too – it is about the music you listen to, the clothes you wear the places you run, the people you run with…

“I think that basically people want to feel like they belong to something. That is an important thing for people to feel. It’s like ‘I want to hang out with you even if I don’t run’. I am trying to build a family not a running club, we are a community.”

What Charlie says next may be surprising, but also shows how he and the Run Dem Crew have taken running to people who would otherwise perhaps not get involved, “People who don’t run are equally as important as people who do run.”

Events like the Virgin Money London Marathon are just one way of getting people involved in the sport, and Charlie takes every opportunity he can, “It is about getting people out from the community to watch the marathon in the flesh. They are then more likely to run it next year. There is something amazing and empowering about watching the race from the elites right back to the guy with the fridge on his back. There is more than one type of runner!
“I find a lot of people who wouldn’t have gravitated towards running but are now excelling in it to their own surprise.”

Charlie has found a range of ways of getting people involved, “When you are doing marathon training and you have got someone who is not running you can be doing loops and they do a drinks station that you loop back to.”

Now you have them involved… “Or you go on your marathon training and you get people to run the half mile you are doing as warm up. I want people to be moving and to treasure the most valuable asset that they have – their health. Health is everything.”

But it is not just big events that can get people interested in running, “One of the means is being very visible in the community. Run in the community that you live in. If people see 20 people running towards them in hoodies they cross the road. If they see them in running gear they think ‘What are they doing? Can I join them?’ We encourage runners to get their families and communities involved.

“I like the feeling of empowerment that running brings you.”

But it is not just one thing that attracts Charlie to running. He is just back from a run with Paula Radcliffe and a group of media who have been at the launch of the latest Nike Free shoes, “The really interesting thing about people like Paula Radcliffe is that she is an elite athlete but there is a common bond – it is one foot in front of the other, a level playing field.
“Running doesn’t care if you are a world record holder or Joe Bloggs doing a fun run.

“People like Paula connect with people on that level of simply loving running. It is a very odd feeling to explain to most people – there is something amazing about running and running with people. There is a primeval urge. You run to the ones you love, you run from danger, you run for food, you run for survival.

“It is an amazing feeling. I love watching running, I love participating, I love inspiring people who have never run before to run and the feeling that gives.”

It is not hard to see why Charlie and the Run Dem Crew are getting more and more people into running.

We caught up with Charlie Dark at the launch of the latest Nike Free 3.0 Flyknit, Free 4.0 Flyknit and Free 5.0 Flyknit shoes. For more information see www.nike.com. For more about the Run Dem Crew see www.rundemcrew.com.