Well done to everyone who took part in the 2014 Virgin Money London Marathon! More than 35,000 runners were cheered on by record crowds around the course and many more tuned in from home.

The crowds were rewarded with two course records and one world record yesterday as well as the incredible atmosphere of more than 35,000 runners taking to the streets for the 2014 Virgin Money London Marathon.

London 2012 rowing gold medallists Katherine Grainger and Anna Watkins set 36,337 runners on their way from Greenwich this morning after 36,621 had registered to run by close of play on Saturday at the London Marathon Expo. By 6pm, 35,864 runners had crossed the famous finish line on The Mall after passing more than three quarters of a million spectators along the route.

Mo Farah failed to reach the high expectations brought about by his huge success in recent years as he finished eighth in his much-anticipated marathon debut. However, his time of 2:08:21 was still an English best and left him as the second fastest ever British athlete behind Newport's Steve Jones who clocked 2:07:13 in 1985. 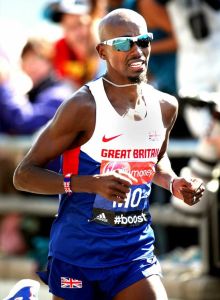 Behind the stars, thousands of runners chased times and fundraising targets, turning the streets of London into a colourful parade as club runners, fun runners, celebrities and Guinness World Records chasers enjoyed the perfect sunshine, many pledging to transform their 26.2-mile challenge into millions of pounds for charity.

Game of Thrones actress Natalie Dormer was one of the fastest female celebrities in 3:50:57, while Shadow Chancellor Ed Balls achieved his goal of a sub-five-hour marathon when he finished in 4:57:40, beating his previous best by more than 15 minutes.

The fastest of the eight MPs was Conservative Alun Cairns who ran his best time of 3:34:16 to beat Labour’s Dan Jarvis who also set a PB of 3:45:08.

More than 40 Guinness World Records were targeted in today's race and 29 broken, including fastest marathon dressed as a baby by Ali King in 2:51:18, and fastest as a playing card by Lisa Wright in 4:23:57.

The ballot to enter the 2015 Virgin Money London Marathon opens on Tuesday 22 April 2014.

If this year's event has inspired you and you'd like to give running a try or even prepare for an event - from your local parkrun or Race for Life 5K to the Bupa Great North Run or even next year's London Marathon - joining your local Run England group is the place to start!

Search for Run England groups near you at www.runengland.org/groups. If you already run, why not spread the word and suggest running to your friends and family!