World of Running unites to get more people running in 2015 Major players from the world of running came together at the Houses of Parliament on Tuesday 2 December to launch a new campaign to encourage business leaders to promote running in the workplace during 2015.

The event saw the new All Party Parliamentary Group (APPG) for Running join forces with Run Group – made up of multiple players from across the world of running – to get more people running more often. Also in attendance to support the campaign were Steve Way – who placed 10th in the Glasgow 2014 Commonwealth Games marathon – and five-time Paralympic gold medallist Noel Thatcher.

Running is an accessible, effective and cheap activity, and Run Group and the APPG want to help people make positive choices that enable them to enjoy running at any level. They are specifically seeking ways to work with business leaders to develop running within the workplace, as part of a national campaign in 2015.

A host of major businesses were represented at the event and many made strong pledges, using the hash tag #myworkruns on Twitter, including setting up running groups, providing online support and encouraging volunteering. Run Group will be working with business to deliver on those pledges in 2015 and widen the campaign further. Companies present yesterday included Accenture, Virgin Trains, BT, Kier, GSK, Morrison’s, Ernst & Young and the NHS. 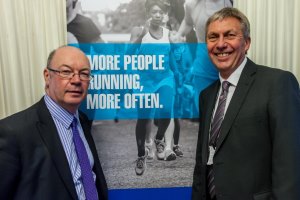 Alistair Burt MP, Chair of the All Party Parliamentary Group for Running, said: “We’re delighted to be partnering with Run Group to play a part in making this a healthier, fitter country by raising the profile of running with MPs, opinion formers and in our constituencies. Running is a simple and easy way to get fit and we also want to get that message through to businesses because there is a connection between a healthier, more active workforce and people living more productive lifestyles. We’re excited to be working with Run Group to get more people running more often.”

David Moorcroft, Chair of Run Group and former 5,000m world record holder, said: “The simple task of Run Group is to get more people running more often. Running in the workplace is a key part of creating a more active society and by working with the APPG for Running and business leaders we hope to create an environment where people can make positive choices that enable them to run to, from or at work. We’re very grateful to all the businesses who have pledged to promote running within their workforces in 2015 and I am sure they will see a benefit to productivity as a healthier, happier, more active workforce is also a more productive one.” 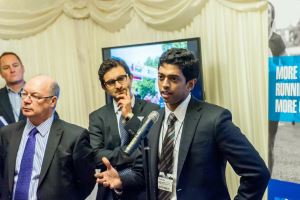 Dr. Harpreet Sood and Dr. Mahiben Maruthappu, Senior Fellows in the NHS England Chief Executive’s office, attended the event. Dr. Maruthappu said: “Obesity is a significant issue facing our population, and one that we must address together. Running in particular is a cheap, easy way in which people can improve their health and fitness – all you need is a pair of trainers! Improving the health of our nation must be a collaborative effort. The APPG on Running and Run Group’s campaign to encourage business leaders to promote running in the workplace is a fantastic platform from which to get things moving.”

Click here to find out more about how Run England can help you promote running in your workplace.