A girl guide volunteer who fought back from a meningitis scare which left her hospitalised for a week has used running to get back to mental and physical fitness.

The Move4Life funded running groups in County Durham has helped her on her road to recovery and she is now taking part in events she never thought possible. 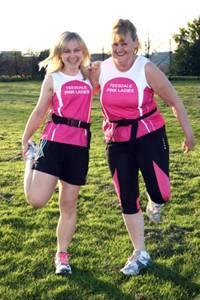 “I never thought I would get to this stage. I had a wish list of goals which started with running to the lamp post, then two lamp posts, then three and having a walk. I have ticked off 1K and 5K runs and my husband Ashley has been marvellous, running the 5K and Sport Relief Mile with me.”

Sarah Watson, County Durham Activator for Run England said: “Mim is a fantastic inspiration and illustrates what Run England is all about, she always has a smile on her face and has improved so much due to all her hard work.”

If you’re in County Durham and fancy getting involved in Run England, contact Sarah Watson at sbeadle@englandathletics.org or telephone 0792 106 0301 for more details.