Adam Hickey balances work at Southend West School Sports Partnership with being a Run England group leader and an international distance runner himself! Over the coming weeks and months he'll be blogging about his own and his group's running experiences, and passing on some words of advice to joggers, runners, other group leaders and coaches!

Firstly let me introduce myself. My name is Adam Hickey and I work for the Southend West School Sports Partnership as well as being a Run England group leader for a running group in Southend.

On a personal level, I am currently focusing on my running and am coached by former London Marathon winner Eamonn Martin, setting our sights on the Commonwealth Games 5,000m whilst coaching my Run England group once a week and looking to start up a second group after the February half term. 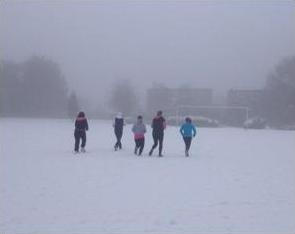 Our Tuesday morning run group is made up of mostly primary school mums who have a mixed history of running, ranging from complete beginners to some that haven’t ran since having children. We all have one thing in common, we love running and we’re all motivated to achieve our goals, whether it is to lose weight or run 5K without stopping.

Our group has been training together since the start of December, meeting in a local park at 9:20am which allows the parents to drop off their children before training. The sessions are designed to test all abilities within the group and usually take place in or around the park, on grass or surrounding paths, we have even been known to use the basketball courts for some sessions.

The group are incredibly resilient and have trained in all conditions, not even the snow has put them off! Over the coming weeks and months I’ll be blogging about my own and my group’s experiences in our running journey. Stay tuned...

Initially coming from a swimming background, Adam Hickey began running as soon as he started secondary school. In his first year at Southend High School for Boys at the age of 11 he won his first National Cross Country title and during his time representing the school at cross country he was undefeated at all of the English Schools Cross Country Cup competitions at Borough, Regional and National final level – a record that can never be broken, only equalled.

Since then Adam has gone on to represent England and Great Britain at cross country and triathlon in European and World Championships all over the world including Kenya and Japan. He studied for a degree in Sport Science and Management whilst training for athletics, cross country and triathlon in Loughborough where he also gained experience of coaching the University Triathlon Club.