Juli Guest is a woman who has managed to do something she never thought she'd do, and improve her health and wellbeing through regular running.
Since joining her local Run England group (pictured, below left) in County Durham as a Slimming World member less than a year ago, Juli (pictured, below right) has lost nearly 5 stone in a steady, healthy way by following a more active lifestyle.
As an inspirational member, Run England asked Juli to share her story in a blog.
I started with my Slimming World group in June 2013, around 40 weeks ago and having lost 4.5 stones during that period I became a slimming world target member. I wanted to start running because I had never been able to - or so I thought!
Naturally not an athlete, I had something to prove to myself, that running was something I could achieve with the odds stacked against me.

I heard about Run England via another Slimming World member who had started running and after Sarah Watson (County Durham Activator, pictured above left on the far left) visited her Slimming World group. I was on holiday when Sarah visited my group, so word of mouth worked for me as my fellow member couldn't recommend it highly enough and being honest if it wasn't for her recommendation I probably wouldn't have bothered, but she was about the same size as me and I felt if she could run then I didn't see why I couldn't. 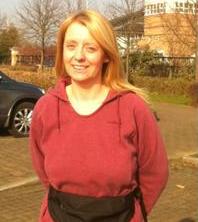 I had a look at the website at the kinds of things Run England did to support you in getting going I trusted her when she said there would be someone there to support me every step of the way. Taking the big step I joined Run England and found the group that was nearest to me.
I was nervous at first, wondering as driving to the park, why was I putting myself through this, but at the same time, really wanting to get fit and seeing the opportunity as a chance I wouldn't get again. The nerves built up and up the closer my sat nav said I was getting to the meeting place but when I parked up and saw a small group of ladies stood around looking just as nervous as me and not all slim and sporty looking I knew I had come to the right place.
The leader introduced herself to me and to my surprise it was Sarah, this made me relax into the group so easily as I felt I knew people already it was such a social kind of thing where everyone was looking out for one another and the walking, jogging and running was almost second.
I can’t lie, my first session felt really hard, stopping every three minutes because I was exhausted, but each time I began to feel I would be slowing everyone down I would hear a chirp of support from the leader or another runner, “I wish I could do as well as you first time round”, “Your motoring”, “well done you”, everyone was so supportive and never did it feel like that old cross country race for me, we were together all the way despite running at different speeds, I still can’t figure out how Sarah managed to do that.
Once I got home, my exhaustion was forgotten, I felt amazing and so proud I had gotten to the end, first time in trying and I managed to walk and run for an entire mile! I didn't know at that stage if I would return, but a week later I was there and starting to recognise familiar faces. The thing that made me return was that I had no aches or pains the morning after, so there really was no reason not to and the feeling of achievement I had immediately afterwards was worth the initial exhaustion. 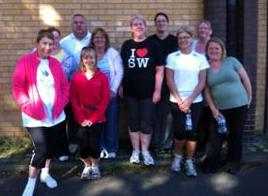 I enjoy achieving something I never thought I could. The ladies who run with me are lovely and Sarah is so patient and kind with me, if it wasn't for her, I am sure I would walk more and run less. Sarah teaches me ways to run properly- i.e. up hills, how to breath and she watches how I run, telling me to push my shoulders back to stop any neck pain. I feel much healthier because of my running and feel it has helped my body tone up and I am sure it has helped me lose and maintain my weight loss which I think is great.
I will never be able to run marathons nor break the 100m record but I enjoy running in the streets for about 3 miles now, running two to three times a week now with my group and I am totally happy running at my own slower pace even having the confidence to run on my own, when the weather is nice.
The whole experience has helped me overcome more barriers as I recently thought to go to the gym, after all it didn’t seem too difficult to do this running lark myself. Truthfully, I didn't enjoy running on the treadmill half as much  as running round the park with my girls, but still felt 'at home' in a place I would never have tried to enter before because my fitness is amazing for me at the moment, thanks to my running. I even found myself missing it, being ill over this past week due to the flu, something that I never thought I would say.
So what has all this brought me, truly it is amazing what you can achieve with a group is such a short space of time and how it helps with transforming your outlook on things; I generally walk much faster these days and can run for buses for the first time ever, I choose the stairs instead of the lift and even run up the stairs at home now, which may seem small, but it is a big thing to me.
Thanks to the continued support from my Run England group, leader and Slimming World I have already hit my target weight in super fast time, I feel great, more energy, less stress.
The Run England CPAL programme involves a monitoring process where participants take part in regular sessions delivered by a qualified leader. Added to this support all participants are provided with a log book to complete a weekly insert to gauge if the intervention is having a significant impact on the general levels of physical activity of the individual.
Juli has improved her level of overall physical activity through engagement with the Run England programme by three hours per week as well as increasing the intensity of the physical activity she is undertaking.