Runners face the elements at Mizuno Reading Half Marathon Well done to everyone who did the Mizuno Reading Half Marathon - the first race of the 2013 runbritain Grand Prix Series - on Sunday!

More than 12,000 people finished the race and despite the cold and wet weather there were plenty of personal bests set by the looks of the comments on Facebook!

The winner was Andrew Lesuuda of Kenya in a blistering time of 64:15, with Emily Biwott, also of Kenya, the first lady home in 72:14. The race finished within The Madejski Stadium - home of Reading football club and London Irish rugby union club. 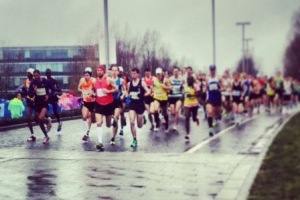 The race also incorporated the England Athletics Half Marathon Championships. The men's winner was Leeds' Dave Webb in 65:14, and the women's winner was Tish Jones in 76:36.

Check out full provisional results and links to photos and videos from the event at readinghalfmarathon.com.