Running to help save lives of children around the world Sunderland running group SeafRUNt Smilers - our Group of the Year runners up both this year and last - joined teams of school children in Save the Children’s World Marathon Challenge.

The Challenge is a global relay event in which teams of around 30 school children race to complete the full marathon distance.

School teams from more than 60 countries across the globe are competing, each vying for top place on the leader board to become the world champion.

Last year, more than 20,000 children from the UK and over 40 other countries including Afghanistan, Ethiopia, Nepal, India, Canada, UK, USA, Kenya and Iceland competed simultaneously to beat the world marathon record – which was beaten only recently by Kenyan athlete, Wilson Kipsang. This year the number of children signed up has already surpassed this figure.

UK pupils are making the most of modern technology to boost their competitive spirit via an interactive leader board to track their progress against their UK and foreign counterparts.

David told the Sunderland Echo: "As well as giving us another exciting sports event in which they can take part in, it’s a great way of getting us all to work together for a common fundraising goal."

Alyson added: “I was asked if I would come down and support it, which I was happy to do because I am always keen to get people into running and also it is for a really good cause. 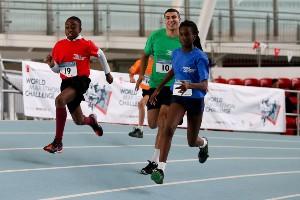 Olympian Adam Gemili (pictured with school children) started the London race at Lee Valley by running a lap before passing on the baton to one of the five schools for the race there to officially begin. He said: "I'm thrilled to lend my support to the Save the Children World Marathon Challenge. This event is a great way to build team spirit and give kids an understanding of the issues facing children far less fortunate than themselves - many who face a struggle even to survive. I hope that the Challenge inspires many of them to take up athletics and join an athletics club."

Steve Mann, Key Stage Director at Barnhill Community High, added: "It’s a great way of getting the school to work together for a common fundraising goal. On top of this, the lesson plans help the pupils understand the problems faced by other young people like them across the world."

Students from Sunderland College also took part this week: “We’re really excited about the event,” said Laura Mitford, enrichment officer at the college. “As well as giving the young people an exciting sports event in which they can take part, it’s a great way of getting the school to work together for a common, fundraising goal.”

Cannock & Stafford AC are overjoyed to report being top of the England leader board in the WMC at the moment. The club had representation at every age group from U13 girls through to Veteran Women and U15 boys through to Veteran Men and so far have raised £252 for Save the Children, with much more to come. Another team from Staffordshire County Council have raised over £300. Spokesman Simon Evans said: “It was a brilliant afternoon and I’m pretty sure we will being doing it again next year, might even challenge a neighbouring club.”

Follow everyone's progress at www.competitioncentre.net and learn more at www.savethechildren.org.uk/wmc.