Run England group leader Carolyn Ditton, 56, has won the overall Sport Maker Award for England for the National Sport Maker of the Year Awards, after being nominated by Active Surrey County Sports Partnership, working with Run England to encourage people to take up running by joining running groups led by qualified group leaders.

The Run England group leader from Surrey competed against Sport Makers from nine other regions, and was awarded with tickets to the Olympics by Sports Minister Hugh Robertson, where she will get the chance to watch events such as the 400m men final, 400m men hurdle final and the 100m men medal ceremony.

The prestigious awards ceremony, held on 12 June at the Houses of Parliament, recognised the people and projects making sport happen as part of the official Olympic and Paralympic legacy programmes.

Carolyn, whose daughter is an Olympic torch bearer, attended her local Sport Makers workshop on 16 Feb 2012. At the workshop she found out about a bursary from Active Surrey and Run England to enable her to complete a Leadership in the Running Fitness course and she is using this training to set up her own running group based in Woking – non-exercising ladies who want to lose weight and/or get fitter – as a fully fledged Run England group leader. 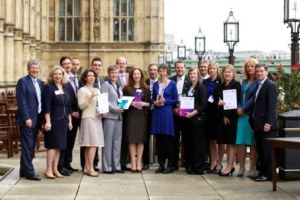 The members of Carolyn's new fitness group, 'Ladies Olympic Legacy (LOL) 2012', are already attending weekly sessions and a goal has been set for some members to take part in the Guildford Park run by the end of 2012. The sessions begun with simple aerobic moves and power walking to build confidence and ensure members were encouraged to run, rather than be put off.

Carolyn said: "Winning this award has truly humbled me. To be nominated was such an honour but to win it is absolutely overwhelming. As the founder of the Ladies Olympic Legacy 2012 Group, I simply want to inspire other ladies to give running a go and enjoy it as much as I do.  I will ensure everyone feels welcome and I’ll do my best to encourage anyone who is currently inactive and wants to get fitter. I would like to thank Active Surrey for putting my name forward and here’s to an unforgettable London Olympics. I can’t wait to experience the event in person and see first-hand the world’s very best athletes in action."

Run England Area Coordinator for the South Louise Milne said: "It's fantastic to see how the Run Surrey bursary has supported Carolyn's success story as a Sport Maker and running group leader with the help of Run England and Active Surrey."

Suzannah Laver from Active Surrey said: "We are extremely proud of Carolyn and pleased that her commitment to Sport Makers has been recognised. She is a shining example of how your own enthusiasm for sport can inspire others to get more active, if you have the vision and the passion to make it happen. It is great we were able to work in partnership with Run England to benefit Carolyn and for Surrey to have the overall winner of the Sport Maker Awards. We look forward to following the progress of Carolyn and her wonderful group as it continues to changes the lives of its members for the better."

Check out Carolyn's video below!

Sport Makers is an official Olympic and Paralympics legacy programme, funded by Sport England through the National Lottery and the Department for Culture, Media and Sport.  It is designed to create an adult participation legacy post-London 2012 and aims to recruit enthusiastic adults in Surrey to motivate and inspire other people to get more active. This could be through organising informal sport opportunities for colleagues during a lunch break, or simply encouraging a friend to go running with you. It can also provide the opportunity for people to get involved in traditional volunteering within a sports club or at a mass participation event.

Click here if you’re interested in becoming a Sport Maker and want to find out more about making more running happen for you and your friends.
Sport Makers will increase the amount of people helping to organise and run sporting activities in Surrey, leaving a tangible positive participation legacy.

Therefore, Active Surrey are running a reward scheme to thank Surrey Sport Makers who complete ten hours of Sport Making and will offer advice, support and information at every workshop. Click here for more on becoming a Sport Maker in Surrey.