Super-fit celebrity and charity fundraiser Nell McAndrew will this weekend join the tens of thousands of runners at the Virgin London Marathon 2012 for her sixth marathon.

This year Nell will join the elite athletes on the championship (Blue) start and hopes to break the impressive landmark barrier of three hours.

In a podcast with Run England she said: "I'm really proud this year especially because I've earnt my place on the championship start, so I'm not going to be plodding around thinking it doesn't matter, I really want to push myself and challenge myself to get that 2:59."

And it's not an unjustified target. Nell, who says she still just runs for fun, has come a long way since she first started running and in last year's Virgin London Marathon she reduced her personal best to 3:08:25.

In 2012 though, she is in the shape of her life, having knocked chunks off her half marathon time to record 81:51 at the recent Bath Half Marathon before becomming the first female home in the National Lottery Olympic Park Run over 5 miles with an impressive time of 29:21. 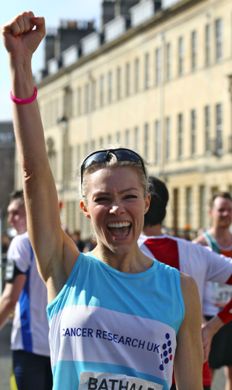 "I was so pleased with the Bath Half Marathon, really loved it, the whole day. It was a lovely sunny day and the drive out there was lovely and it was really well organised.

"I feel really proud to have been able to take part in that, it was the first time that the run has taken place and we crossed the line before any of the Olympic athletes will!"

But despite showing huge improvement year on year, Nell still admits to feeling the nerves just as much as when she toed the line for the very first time.

"The hard bit's done hopefully and I've just got to try and enjoy the day, but I'm so nervous and I know loads of other people feel the same way especially people who are doing their first marathon.

"I met quite a few people at the marathon expo yesterday when I went to pick up my number and for the people who are doing their first one it's just an unknown for them and they just don't know what to expect and they're really nervous. But everybody is on the day and it's good to have nerves I suppose!"

Having a go at an event every month or so to get used to the experience, as well as an early night and a massage in the last couple of days and a big treat after the marathon is finished was Nell's advice for first time marathon runners.

Nell is leading the Cancer Research UK team at the Virgin London Marathon 2012. As the charity’s running ambassador, she hope to raise as much as possible to help fund its vital work into the prevention, diagnosis and treatment of cancer. You can sponsor Nell at her official website www.nellmcandrew.tv.

Earlier this year Nell completed an England Athletics Leadership in Running Fitness course, the same qualification which Run England group leaders have, with a view to setting up a Run England group.

In the podcast below she talks about her experiences, nerves, what motivates her, what she will treat herself to after the race and she also gives some great advice to recreational runners everywhere - whether you're running your first marathon on Sunday or not.

From everyone at Run England we wish Nell and all taking part on Sunday a big good luck! You can still visit us at the expo on Saturday from 9am-5pm, stand 525!