Debbie Rooney is aged just 43, but it is fair to say that fitness had already slipped down her list of priorities, and after being a healthy and active 20 and 30-something, she became a tired and jaded 40-something who, despite being happy with her life, had slipped into the mindset that she didn’t need to exercise much anymore.

That was until November 2010, when a routine trip to the doctor’s to discuss headaches revealed that Debbie (below) had high blood pressure, for which she was prescribed drugs. Unhappy about this, it became her mission to lose weight , get fit, lower her stress levels and stop needing to take the medication.

She started off by doing some of her of fitness DVDs and jogging on her own. Debbie had never really run before but had read that it was a good way to reduce her blood pressure. She also admired her friends who ran and saw it as a natural, free and liberating thing to do. However, running can also sometimes be a lonely activity which can effect motivation.

Debbie was already friends with Gaye Fletcher – Group Leader for Strideout running group (above) – who explained how she and fellow Group Leader Andrea Barber had set up the group and encouraged Debbie to come along. 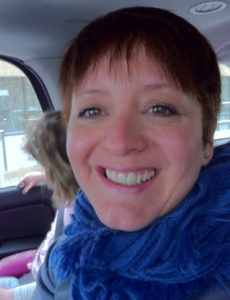 So she did – taking her daughter along for moral support! Anxious but excited to be doing something, Debbie described the first week as being difficult but wonderful at the same time.

She said: “I was slow and breathless (and red in the face when I got home!) but I did it and that was an incredible feeling and that’s why I keep going now. Even though I’m not a ‘natural runner’ it doesn’t matter, it’s the fact that I’m doing something rather than staying at home and just thinking about it.”

Just a few weeks after starting with Strideout, Debbie was told by her GP that she could stop taking the blood pressure drugs and was thrilled. She still uses a blood pressure monitor at home and says that it is always lower after running than at any other time.

Because of the changes in Debbie’s health and mood, her husband Chris started running too and the pair help motivate each other. Debbie also goes to a ‘leg strengthening and stamina class’ that Andrea runs weekly to help her group with their running.

Debbie and Chris also go for a weekly three mile walk together which they didn’t do previously and have even talked about doing a half marathon together, which shows just how far they have come with their running as well as meeting lots of lovely people who help them along the way.