In February, over 6000 runners took to Parliament Hill in London to complete the English National Cross Country!

From Olympians, backmarkers, and parents to coaches this event is for all as the challenging course at Parliament Hill became the centre of the running world for one day only.

We caught up with some of the RunTogether community who took part to find out about their journey to the Championships, including backmarker, Em Bish from Beeston AC and Altrincham’s Dave Norman. 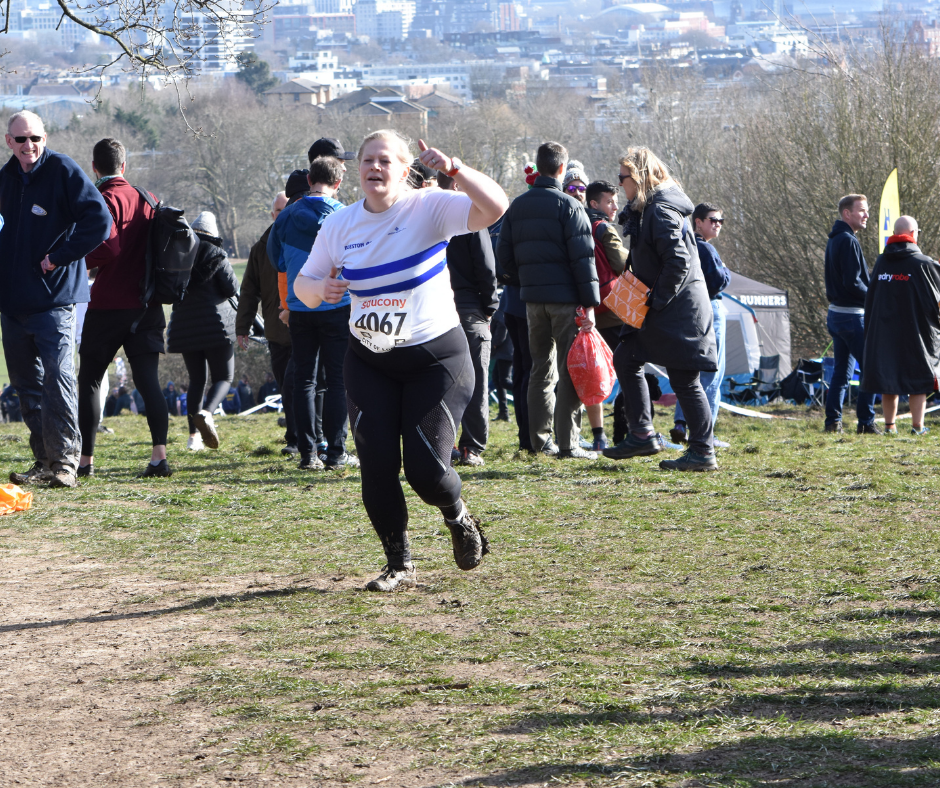 Finishing 997th out of 1011th didn’t stop the incredible Em Bish, as her attitude and determination sums up the all-inclusive nature of cross-country running.

As someone who has struggled with a series of debilitating conditions throughout her life and had no history of physical activity until recently, she is an inspiration to all of us. Diagnosed with systemic juvenile idiopathic arthritis at the age of two, she was told not to do PE in school. The advice would be different today, it should be added. Her flare-ups grew less frequent as she grew older but other complications linked to the condition came to light.

In 2013, she was diagnosed with underactive thyroid and fibromyalgia, which is a post-viral condition leading to widespread muscle pain, and chronic fatigue. Two years later she was housebound due to a disc bulge in her lower vertebrae and was unable to use her right leg properly. An injection and 12 months of physio set her on the road to recovery. After losing three stone in 2016, she was inspired by her husband taking up running to join him at Beeston AC.

“After running 5k, I tried to run further and found that I had capacity to do 10k without dying!” she said. “I never thought that I could call myself a runner, but the more and more I do it, the more confident I become. I always thought runners were shaped in a certain way, but I have had my mind changed through meeting so many different people who have found the joy in running. I may not be the fastest runner — I don’t think that I ever will be — but what I don’t make up for in speed, I certainly make up for in determination to finish the race and celebrate together with my club!”

As for the event, she recalled: “We travelled into London in the morning and had a bit of a morning in London. We arrived at the scene with about 45 minutes to get ready. I didn’t anticipate the queues for the toilet! I got into my spikes then went down to the start-line, which was quite nice. I was able to find other Beeston AC people. It was quite a good atmosphere when the gun went off.

“Fibromyalgia is ongoing, and I have medication for that. It was a bad pain day on Saturday morning, and I was doubting I would get across the start line. It’s widespread muscle pain that I have all the time. It was quite tiring to get there but I think, once I was there, the adrenaline kicked in of just seeing everyone and the crowds cheering you on. It was quite tough, but I loved it. I love the mud. Last time, at Wollaton Hall, I was eighth from the end and this time I was 14th from the end so I thought I’ve made progress in some respects. I was in it to finish it really.”

Em was delighted with the support on the way around, even though having the under-20 men zooming past her at the end as they completed their first lap was disconcerting.

“It was good as people were reading out my bib number and also I had some Beeston club members in the crowd,” she said. 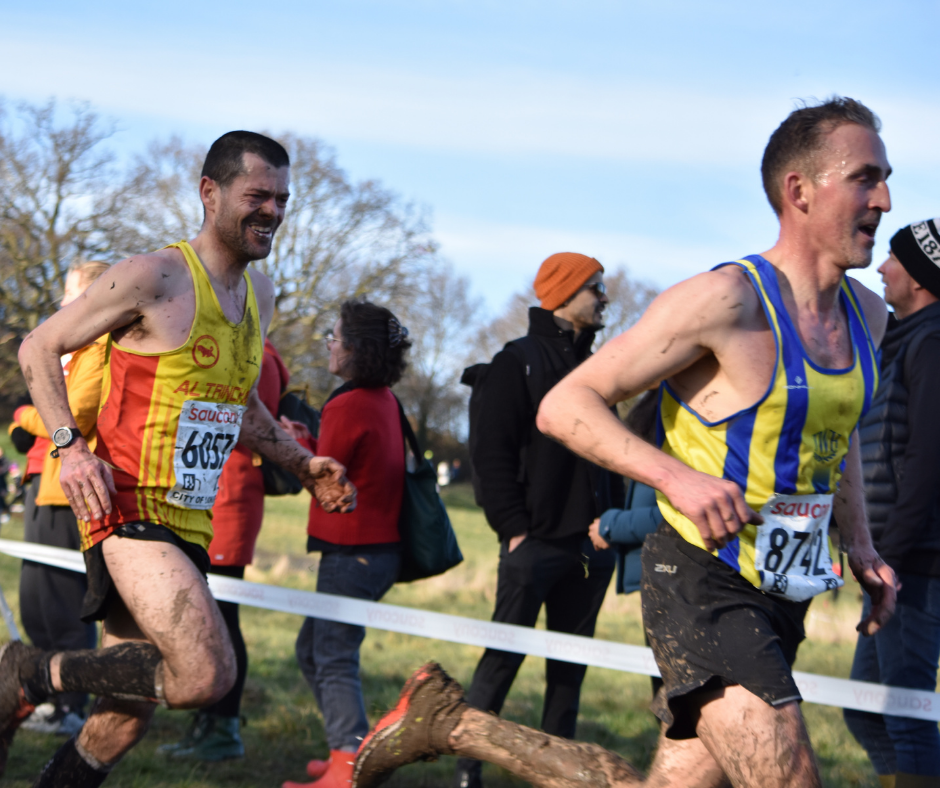 Altrincham’s Dave Norman is a well-known figure on the running circuit. For good reason too as the former Manchester Marathon winner has been an ever-present at the English National Cross Country since 1998. Given it wasn’t held last year, this was his 24th. He explained what keeps him coming back:

“It’s the history of the event. I grew up reading all about it. It’s the atmosphere, for me it’s just a big celebration of club running across the country. I love cross country myself. I love the challenge of it more than anything.”

Dave has placed as high as 12th and, with 159th this year as a vet-40, he continues to run well. This year’s was the first National in which he had stayed in a hotel the night before. He travelled down with Mick Hill from City of Leeds, who was 67th in the senior race.

“I woke up around 8.30am and then had a mid-morning breakfast because I thought we might struggle to get anything else before the race. We stayed in Hemel Hempstead and then we travelled down about 12 but the traffic on the M1 was pretty bad so we didn’t get to the venue until maybe 1.15pm. But coming down the day before did take a lot of the stress away.”

He didn’t need to do a course recce as he is so familiar with the course that holds the National every third year. And there was no doubt about what length of spikes he was going to wear on the always boggy course. He said: “I spent some time in the hotel in the morning watching some videos on social media of people assessing the course and they were all saying the same thing, 15mm, so that was mind made up.”

Dave starts his warm-up 45 minutes beforehand but allows an extra five minutes at the National to get into the starting pen. Once the race is under way, his experience helps further. He said: “I’ve run Parliament Hill enough times to know that, if you don’t get up that hill in a decent enough position, you’re going to get caught in a few of those bottlenecks and that’s what happened to me. At 43, I just can’t get out quick enough. I must have been well outside 200 at the top of the first hill and it’s just a question of negotiating those bottlenecks and queues and making my way through the field as best I could.” When it comes to the cool-down, Dave added:

“I always make sure I get at least a mile in but ideally two miles just slow jogging and getting the race out of my legs as best I can. I know I’m going to still feel it the next day but it’s essential to get something done. We struggled to find anywhere [to eat] so we just had to wait til the services and got some convenience food, which wasn’t ideal but that’s part and parcel of travelling away.”

If you feel inspired to begin running your running journey and don’t know where to start, take a look at our top tips here. Why not join a local RunTogether group, and join our community? Find your closest RunTogether group here.