Leeds-based running group leader Hilary Wharam, 72, who manages an arthritic spine, is a seasoned runner but could be forgiven for taking it easy after years of pounding the pavements. But she is determined to show that age and disability need not prevent anyone from doing what they love, leading an active lifestyle and even completing a marathon!

Hilary is a group leader at the Run Leeds – Horsforth Harriers Absolute Beginners group. In February she found out that she had been successful in winning a place in the 2014 Virgin Money London Marathon through Run England’s group leaders’ ballot.

Despite having run in 11 previous London Marathons and 24 marathons in total, her last experience had not been her best, but in 2014 she was determined to put the demons of 2009 behind her. 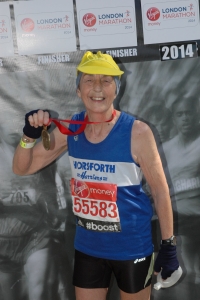 She employed military precision in her preparation and finished well within her target time of six hours (the ‘Good for Age’ time that would ensure her a place in the 2015 event!) with 5:47:10. She was amazed when a friend from the club showed her all the coverage on Twitter and she received a standing ovation from the club on her return!

“My 11th London Marathon in 2009 was so painful I vowed no more road events. Five years on with knowledge of pain cause and pain management, I ran my 12th London and 25th marathon to prove that at 72 and arthritic you can still be ‘Good for Age’,” she said.

“I know I inspire my club, and I hope I give many others hope. There is no barrier, so aspire, plan, achieve and inspire!”

Since April, Hilary has not been resting on her laurels, and is currently ‘on a roll’, putting the rest of us to shame! She was the first 70+ woman at the Leeds Half Marathon, The YVAA (Yorkshire Veterans Athletic Association) Championships over 5K and 5 Miles and in the popular John Carr Series organised by Saltaire Striders.

But Hilary is not just excelling in her own running. She is putting all her experience and expertise into good practise by inspiring everyone around her too. Over the past eight weeks four of her beginners have moved up to a faster group and she has seen five new beginners join her group in the last six week block. With the lighter evenings, she has been taking the group off road and getting them used to a little bit of mud. 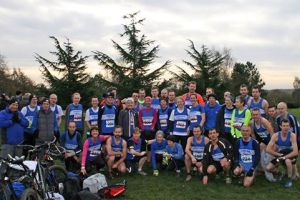 “I ran ahead a little way last week and told the front runners it was so I couldn’t hear them shouting at me! They all finished the session and went away bright eyed and bushy tailed!

“Just keep them laughing and they’ll go anywhere and do anything!”

Hilary, we applaud you for your achievements and say a big ‘Thank You!’ for everything you have done to inspire people to live more active lifestyles through running!