A new running group in Kent is proving popular with locals (including local peacocks!) who walk, jog and run around beautiful castle grounds in full view of the Castle itself while it's closed to the public.

The Leeds Castle running club was set up in partnership with Ocean Lake Triathlon Club in April 2014 and the sessions at 7pm every Wednesday have already attracted more than 30 runners of all abilities.

Alysha Sargent, Head of Engagement & Events at Leeds Castle, said: “When Ocean Lake Triathlon Club approached me about setting up a new running club at the Castle, I thought it was a great idea.  It’s an opportunity for people to run around the grounds when no one else is here & take in the amazing views and scenery.

“The Run Leaders and Coaches do a fantastic job and cater for all abilities with beginner walk-jog sessions, running drills for the more advanced, through to 5K runs for those that want to go further afield. There’s definitely something for everyone at the Castle and we hope many more people will join us over the summer months.” 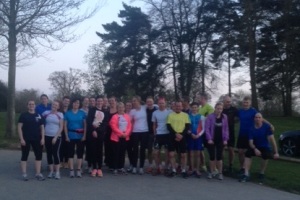 You don’t have to work at Leeds Castle to join in these running sessions.  The club welcomes all abilities, so you can just turn up on a Wednesday evening and have a go!

Lucy Tomlinson, RunKent Activator, said: “We have a huge variety of running groups and clubs in Kent catering for all abilities but I don’t think any of them have a venue quite as majestic as Leeds Castle Running Club. Thanks must go to the team at Leeds Castle for giving runners in Kent the opportunity to run through the Castle grounds on a weekly basis. Definitely an opportunity not to be missed!”

For those of you who like to mix it up with swimming and cycling before your running, Leeds Castle have also teamed up with Ocean Lake Triathlon Club to offer a Weekend Festival of Triathlon events on 28-29 June. Click here for more information and to sign up to these events.

Click here if you’d like to join the Leeds Castle Running Club (scroll down the events page to the club details).

Click here to find out your local running group.