INEOS GO Run For Fun™ has got 15,000 children running after 800 were cheered on by Tanni Grey-Thompson and Michael Rimmer in Stockton last week.

Toni Kent, a year 5 pupil from Tilery Primary School, Stockton, was the campaign’s 15,000th runner to cross the finish line. This marks the halfway point in the campaign which aims to get more than 30,000 children aged 5-10 to take part in one of the GO Run For Fun events across all corners of the UK.

The UK’s newest mass participation running campaign for children aims to encourage kids to get off the couch, give the TV a rest, get active and have fun, regardless of ability.

The GO Run For Fun series is the idea of Jim Ratcliffe, owner of INEOS, one of the UK’s largest manufacturing companies, who recently announced a £1.5m donation spread over three years to establish a new charitable foundation to encourage children to run for fun.

Go Run For Fun will work with parents, children and communities to encourage children to have fun running. The charity is already supported by three leading British Olympians, Lord Coe, Brendan Foster and Colin Jackson, with more celebrity and sporting ambassadors expected to be announced shortly. 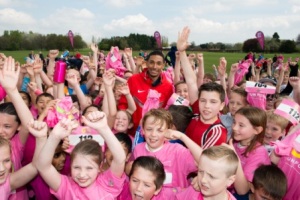 Put on your trainers and your GO Run For Fun T-shirt, then run 1 mile however you like and have fun with your friends as you go.

Jim said: “I’m passionate about getting as many children running as possible as early as possible. The idea is simple – to get children out of the house having fun. It is not rocket science.

“Running is the basis of so many great sports. If our children can catch the running bug early, they’re more likely to stick to it, and this can only lead to them having more active and healthier lifestyles in the future.”

It has already established itself as a leading advocate of children’s running with more than 15,000 children taking part in its runs since August last year. It expects to organise 250 events over the next three years involving more than 100,000 across the UK.

Michael Rimmer, said: “It’s brilliant to have over 800 children here today, all participating in GO Run For Fun. These fun events are a great way for your kids to get out of the house and have fun with their mates - running.

For more information and to enter your child for INEOS GO Run For Fun events happening near you, or to register your local club or school’s interest in joining our campaign, please visit: www.gorunforfun.com.